I first saw this pipe without any knowledge of what Alex had called it himself, and as such my initial impression was a nagging reminder of a particularly graceful piece of sci-fi art I could only half-remember. Eventually, I pinned it down: It was the cover of the omnibus edition of Jack Vance's massive saga of horror and slapstick, "Tales of the Dying Earth", as done by John Berkey. The sense of space and self-suspending form, the dramatic sweep of arcing, orbiting lines - this Alex Florov indeed shares quite a bit with Berkey's own famous style. I guess this shouldn't come off as too surprising, as different as "sci-fi cover art" and "pipemaking" may be, given that Alex does have a background as a professional model-maker and prototype designer for a number of model-making companies. Of course, for Berkey, there were two things he didn't have to worry about, but which Alex has clearly mastered: dealing with a fully three-dimensional form, and wood grain. Having had the opportunity to handle this briar, I can tell you, Alex nailed it. This is a smoking instrument, sure - but it is also and absolute work of art. 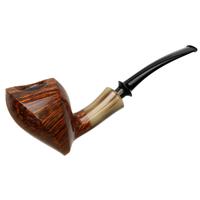 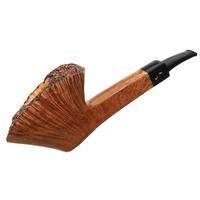