Alex Florov was originally born in Moscow, Russia, and has spent the vast majority of his professional adult life working with both exotic and delicate materials, as he spent many years repairing museum-pieces for the Russian antiquities market. In 1992 he moved to Chicago where he started work as an industrial designer and, in 2004, was challenged by his father-in-law to make a pipe. The result of this was a pipe, of course, but also a legacy that has persisted since then and transcended the generations, with his daughter Dasha picking up the torch of her own accord not too long after her father started. Using mostly hand tools, Florov crafts pipes of exceptional quality, pipes such as this naturalistic long-shank Acorn rendition.

The Acorn itself is a rather organic-looking shape in general, with Danish and Japanese renditions often accentuating the plumpness of the bowl, keeping plateau on the rim, and introducing subtle elements of asymmetry. Florov has instead opted to imbue this piece with an organic look through the harmonious balance of the fore and aft sides, keeping the bowl at the center of attention, but doing so with careful consideration of the rest of the stummel. The lengthy shank of this pipe issues out from a wide, expansive transition, gently lifting upward and flaring as it reaches toward band of Ivorite at the junction, its rounded outline continued through the stem base thanks to its domed shape. This is a particularly lovely example of this technique, and the slight outward push at the very end before the bit takes hold adds a touch of visual separation and slight firmness to counterbalance the more rounded edges everywhere else in this piece. These contours see the bowl and the shank existing in a poised equilibrium, the latter's extended reach supporting the former in such a way that resembles a blossom held aloft by a tree branch.

Said bowl is possessed of a mid-set waistline that acts as the apex of a gentle flare before starting a taper to the rim, all as it stands atop a pronounced, rounded heel spur, something that introduces its own bit of visual separation between the bowl and shank. The rim is smooth, curved, and lightly inflated, further accentuating its softness and introducing some textural contrast that stands out against the earthy sandblast of the rest of the stummel. 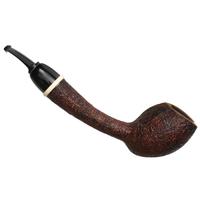 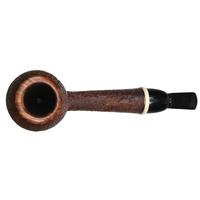 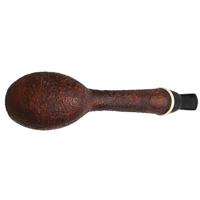 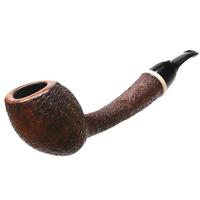 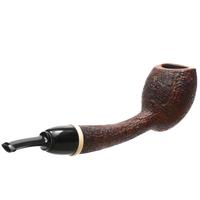