There are precious few names in the pipe world which can inspire awe solely upon their utterance, and Hans "Former" Nielsen is one of them. Former's career in pipe making stretches far into the past, when Nielsen was an adolescent, repairing pipes in Poul Rasmussen's shop in Copenhagen when he was just 15. In his two years there, Former learned the ins and outs of the internal structure of pipes, the best ways to drill them and to slot them so as to ensure excellent smoking. After his service in the military and a short stint as machinist with Sven Knudsen, Nielsen was hired as a carver at W.Ø. Larsen at 21 years old, spending 10 years with the marque and making his way up the ladder to a supervisor position, where he oversaw the work of artisans such as Tonni Nielsen and Teddy Knudsen. His early experiences ensured that Former not only had a peerless understanding of the inner workings of pipes, but also an eye for subtle details and shaping conventions that influenced the quality of his future work. Today Former has been crafting pipes for over 60 years, a level of experience matched only by a small handful of living artisans, and Nielsen utilizes every bit of it with each piece he crafts, reflected in his low yearly production rate, making sure his pieces are as close to perfect as possible.

This bent Apple is the latest in Former's pursuit of perfection, and, if I may say, is a reasonably rare shape from the living legend, as we have only ever seen four new pipes of this shape in the past. This example is also unique, in that there is nothing similar to it in his portfolio, save for perhaps one piece from 2019 that I can't seem to find on our site anymore. The half-saddle stem is trim and demurely curved, possessed of the slightest downturn at the bit, and attached to a sweeping shank, the flat ovoid arcing upward fluidly from the transition, creating a continuous undercurve that runs from bit to rim. The heel is lifted, and feeds into a low-set waistline that tapers, at its zenith, to the rim which, just before reaching the smooth crown of briar, flares very subtly. This understated detail imbues the bowl with an Egg-like disposition, and enhances what is already an incredibly enthralling profile. The stummel, save for the rim, is dressed in a shallow sandblast that reveals a lovely array of undulating ring grain which radiates from the heel to the rim, all stained a deep, dark ruby, its texture contrasting that of the chamfered rim and matching with the stem, giving it a handsome, slightly rustic character. 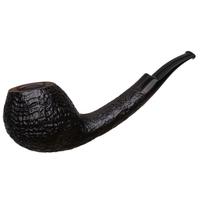 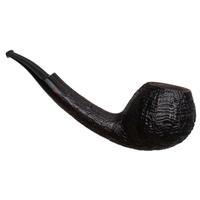 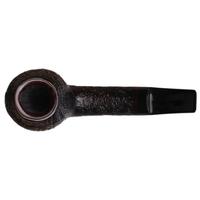 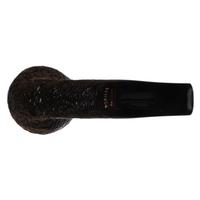 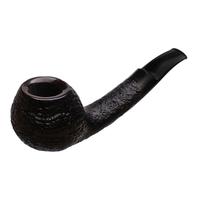 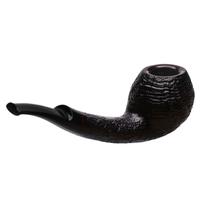