The BoDog shape from Love Geiger and Sara Mossberg pays homage to the legendary Swedish artisan Bo Nordh, specifically an iconic shape the he crafted only once. The only known example of the shape created by Nordh years ago was smoked just one time by its owner, when it was observed that because of the pipe's shape the rear chamber wall near the transition was becoming abnormally hot, putting the pipe at risk of developing a burn out. The shape has seen a resurgence in modern times with many pipe makers crafting their own interpretations, with the versions fashioned by Sara and Love being a signature shape from the Swedish husband and wife duo. The first version from Sara and Love originated from a collector's request for them to produce their own take on Bo Nordh's shape, utilizing a sketch of the shape owned by pipe maker Bengt Carlsson and developing a way to avoid the sole flaw of the original design.

This particular example from the Geiger workshop is an exceptionally stunning rendition and quite unlike previous versions we've received. The addition of the boxwood along the rim gives it a distinctive Calabash appearance, though it forgoes the removable rim featured on traditional gourd renditions and is set firmly in place. The crisp beadline around the bowl's waistline creates a visual break in profile while giving the boxwood more visual prominence. The pinched transition sits neatly tucked away underneath the protruding rim before giving way to the flaring shank, with reverse Calabash engineering housed within. Additional boxwood graces the domed shank face, with the stem's base mirroring its shaping and echoing the crispness of the bowl's beadline. It's finished in a crisp, dark-stained sandblast with the rim left smooth to contrast. The innovation and craftsmanship that defines Geiger pipes is on full display with this BoDog. 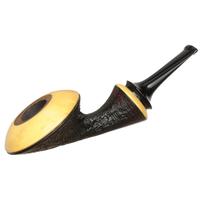 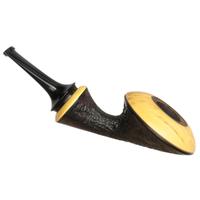 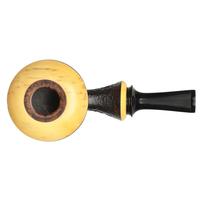 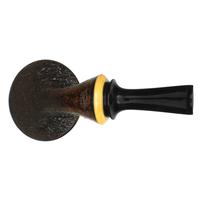 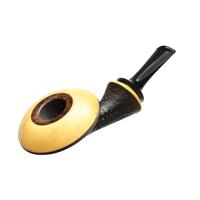