With an incredibly low annual production rate, Kei-ichi Gotoh approaches each pipe with a high level of dedication and intentionality, supported by over 40 years of artisan pipe-making experience. His work is rare, and always a joy to witness, with many of his pipes displaying a sculptural style that imbues even classic shapes with a strong sense of creativity. Such an aesthetic is personified in this Dublin rendition, which maintains the traditional shape's upward-flaring bowl while simultaneously creating a composition that's highly individual and unique.

When analyzing this pipe, the unity between the shape and grain is immediately impressive: Every line and aspect of the form has been intentionally carved to maximize the briar block's potential. The flame grain across the bowl perfectly conforms to its flaring nature, and the subtle ridgelines through the shank frame flame grain along the flanks and separate it from birdseye above and below, the hard lines acting as border. In reality, those ridgelines are incredibly low-profile, and their existence is only noticed because of the grain orientation and their subtle in-hand texture. Said lines also echo the shaping of the stem, which is slightly diamond of cross section, as is typical of Gotoh's mouthpieces, and such a design cue incorporates the stem into the overall composition, a feature supported further by the Japanese carver having made the base of the stem flush with the slanted orientation of the shank face.

When viewing the shank from the smoker's perspective, one notices it tilts slightly to the left compared to the upright posture of the bowl. This intentional asymmetry not only adds uniqueness to the design, but it follows the orientation of the flame grain along the shank face, which also flows leftward. In profile, the shank flares dramatically toward the end, with the edges neatly paneled and the top most portion retaining the briar's natural plateau to match the broad rim. While plateau is commonly found on pipes, Gotoh has treated it differently than other makers: American artisan Adam Davidson — a strong admirer of Gotoh's work — and I were discussing this piece together and how the texture of the plateau is maintained and yet birdseye is still visible underneath, two aspects that are typically mutually exclusive. The Japanese master paid extra-careful attention to the plateau treatment, meticulously retaining its naturally rounded texture while also allowing the birdseye to shine through. It's a stunning feat of craftsmanship that neither I nor Adam had witnessed on a pipe before, and its aesthetic results are a marvel. 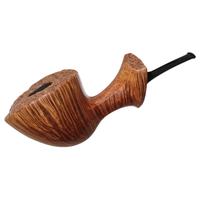 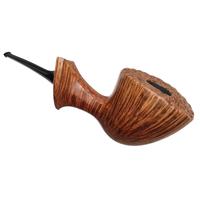 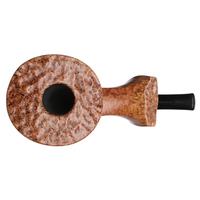 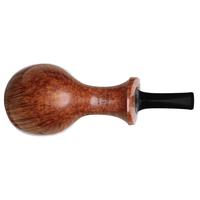 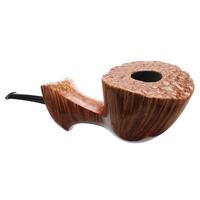 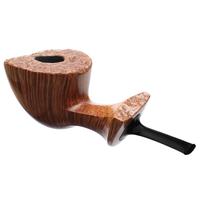