Gotoh's pipes are rare. We receive a tiny handful each year. The waiting list for Gotoh's pipes is such that we haven't offered one on the website in a couple of years. Moreover, this is one of the most extraordinary Gotoh pipes that we've ever had.

Gotoh constructed the shape around two ideas that he's played with for some time. The leaf shape as a source of inspiration for pipe shapes is really important to Gotoh. The transition in form and shape over the years has been extraordinary. We received our first pipe that Gotoh entitled the 'Leaf' in early 2004. This shape, this version of Gotoh's 'Leaf' theme, is reminiscent of 19th century Edo wood block print themes. It's stylized and formalized in the self-referential style typical of Japanese art of that era. The leaf shape that defines most of the bowl shape is joined by a sliver of a moon at the shank, set at an angle to the leaf shaped bowl.

It goes without saying that the grain is deftly incorporated into the composition. Vertical straight grain covers the sides of the bowl with birdseye on the top and bottom of the bowl. A large patch of orange-red stained sandblasting is carefully integrated into the shape of the underside of the bowl. The sandblasting balances the visual field of the bottom of the pipe; it's not the kind of symmetrical balancing that one would see in western art, but it is the kind of balanced asymmetry that we've come to love from both Kei Gotoh and Hiroyuki Tokutomi.

The stem is initially surprising. The bulbous decorative flourish really seems to contradict some of the other stylistic elements at work. However, it's clear that Gotoh is intentionally juxtaposing these elements. He had to visually weight the stem in such a way that it wouldn't be lost compositionally next to the bowl. Yet this is a challenge lots of pipe makers (including Gotoh on other pipes) encounter frequently. So what's at work here? It seems clear that Gotoh is intentionally juxtaposing the soft bulbousness presented on the stem against the extreme formalized angularity of the bowl.

This is a sophisticated, and in many ways aesthetically challenging, composition. Truly great pieces require considerable involvement from those that look at them, touch them. This is one such piece. All in all, it is an extraordinary achievement from one of the greatest pipe makers in the world. 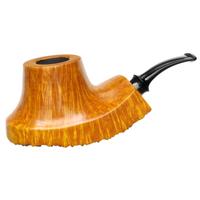