The Fish shape is a design popularized by Danish artisans like Lars Ivarsson and Jess Chonowitsch, and one that's become prevalent in artisan pipe making across the globe. Not to be confused with the Blowfish — which often features a central panel, flourishing ridgelines, and grain orientation that poises birdseye on the flanks — the Fish is marked by a rounded bowl, typically of Egg-like shaping, and a teardrop shank, with a ridgeline running through one side. The exact shaping varies from artisan to artisan, with many altering the proportions and approaching the shank's ridgeline differently, sometimes continuing it through the bowl and other times terminating it at the transition.

Jared Coles has often celebrated iconic Danish designs in his portfolio, such as his homage to Sixten's Peewit shape, and this Fish is yet another commemoration. Though compact at under five inches in length, this piece packs a strong degree of muscularity into its Nosewarmer package, the bowl's voluptuous curvature matched by the shank's stoutness. At first glance, this seems an archetypal take on the Fish — immensely beautiful in its own right — but a closer look reveals details that elevate this rendition even further. The rim is concave in profile but is slightly tilted compared to the central, horizontal axis, creating some accenting asymmetry along with the teardrop line of the shank. That line ends at the transition to maintain the smooth roundness of the bowl, and the stem is of split-stem construction: The base is fashioned from emerald-hued, brindled vulcanite, fused with the ebonite comprising the rest of the mouthpiece and button. The added color is conservative and deeply alluring, combining handsomely with the ruby stain of the smooth stummel. 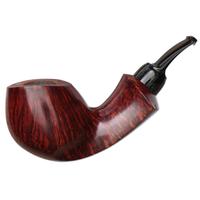 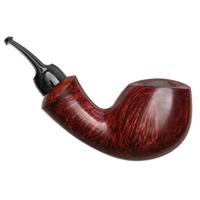 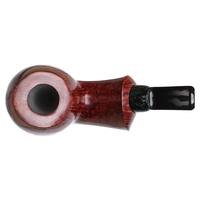 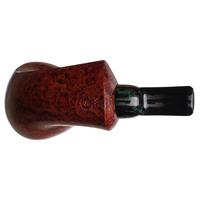 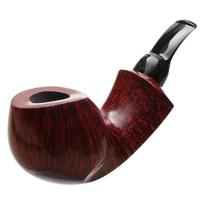 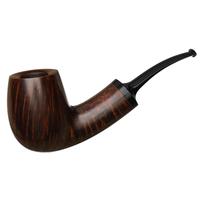 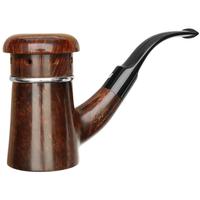 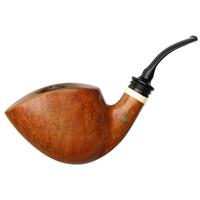 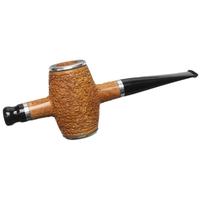 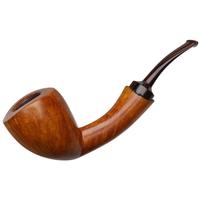