Jared Coles' history with pipes started in childhood, having been enamored with them ever since the first time he saw his grandfather smoking one. Appropriately, then, he came into the fold as a pipe smoker as soon as he turned 18, discovering the artisan world of pipes while he was in college and further engrossing himself in his passion. He formed the J&J Pipes workshop with friend John Klose after experimenting with pipe making himself, and for eight years they worked together before amicably dissolving the partnership to focus on his own work. The breadth of styles that Coles has explored spans the world, and he draws inspiration from all of these schools of design when crafting his pipes, something which can be seen in this unique, speared interpretation of the Fugu shape.

We've encountered a number of similarly stylized shapes throughout our history, most predominantly the Fish, but the Speared Fugu is a rarer rendition. One of the mainstays of the speared/pierced shapes is their striking interplay between sturdy, solid lines and curved, momentum-filled shapes, in the form of the "spear" and the speared respectively. In many iterations, the spear is either arced very slightly throughout its travel, gently bent at the button, or straight, but here Coles has taken things in a different direction. In fact it almost looks like the spear has been broken, as we see the stem arc upward out of the curling shank, while the main portion of the spear sits far more mid-set, bridging the gap between shank and bowl. From an artistic perspective, it's as if the Fugu were speared and then immediately began fighting with all its might, and though it may lose, the hunter has lost their spear, and therefore their quarry. The stummel has been surrounded on nearly every side by framing ridgelines, creating a firm, powerful outline that serves to emphasize the enormity of the form's momentum, with the shank flicking up and appearing to twist to the right as it does, its face marked by an impressive hollow carving and inlaid vulcanite ring which matches the black stem and reinforces its mount.

Up front, the ridges that run through the shank continue into the bowl, wrapping around its flanks and framing them both in handsome asymmetrical panels, the right smaller than the left and extending the ridge near the aft side to form a "fin." On the left, the upper fore has been pushed out from the base surface of the briar, altering the view from the front quite a bit and terminating in a patch of plateau. I'm instantly reminded of a mouth, as if this were the speared fish once again fighting back against its attacker, the outward push of briar toward the left serving to balance out the trajectory taken on by the shank and allow the asymmetry here to work in harmony. Dressed in a vibrant mahogany stain that reveals bountiful cross grain through the middle and vast swaths of birdseye on either flank of the bowl, the most striking element of the finish is the genuine 23K gold leaf which covers the plateau sections on the left side, as well as the shaft of the spear, introducing vibrant, regal contrast. 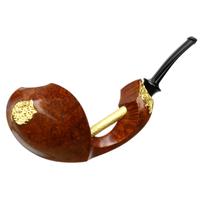 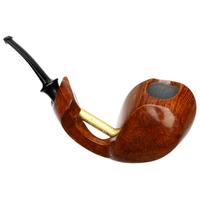 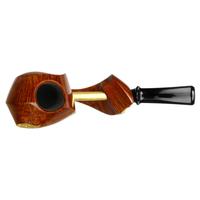 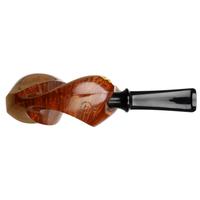 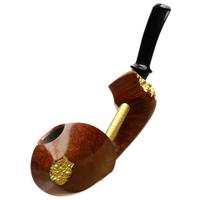 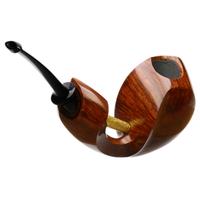 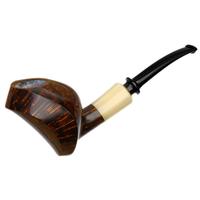 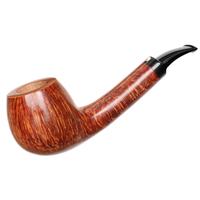