Ken Dederichs has a strong affinity for the Mushroom shapes and the Germany-based, Japanese carver has produced several distinct interpretations in the past. This particular rendition is perhaps the most fluid and graceful I've seen from Dederichs, favoring soft curves and sweeping lines over the firm ridgelines Ken often utilizes in his Mushroom designs. In profile, this piece is rather Horn-like with a smooth, gradual transition that curls into the muscular, flaring bowl. The ridgeline encircling the bowl's waist is relatively reserved compared to other Mushroom renditions and is wonderfully employed here to accentuates the tapered rim's dome shape. That ridgeline also perfectly demarcates the birdseye patterns that saturate the rim from the streaks of vertical grain that wrap around the bowl's flanks underneath. The round shank continues the bowl's heartiness and leads into the elongated saddle stem which displays an extremely subtle, barely perceptible downturn as it works its ways to the lip button. It's a minute detail but has been executed with the careful precision Ken Dederichs' work brilliantly displays. 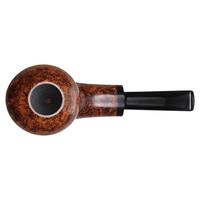 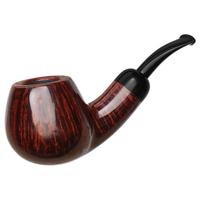 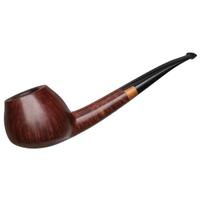