Lan Zhenjun takes a good deal of inspiration from the Danish masters in his work, the Chinese artisan leveraging this and his background in graphic design to create pieces rife with supple curves and balanced flow such as this bent Dublin. The Danish influence here is readily apparent, though Zhenjun's own sensibilities are not lost in this compact pipe, as it presents with a bowl that's slightly larger in proportion to the shank and stem. In effect, this not only places greater emphasis on its presence, but it accentuates the plumpness of the bowl by pushing it into further prominence. Not only this, but the extra attention given to the soft lines and rounded edges enhances those present in the shank and stem, something especially prevalent at the underside, where we see a sweeping curvature throughout the composition from stem base to rim. I'm reminded of the Horn shape, in that the heel is less defined than we're used to seeing from a bent Dublin, and this is a good thing, as it speaks to the fluidity of the shape as a whole without detracting from the other iconic elements of the profile.

The shank here is gently upturned, its slightly ovoid presence curving to meet a trim, demurely downturned saddle stem, with the entire combination possessed of an easy horizontal taper. It's very difficult to continue a taper like this through a saddle stem, especially as Zhenjun has taken in the stem's width after the base a good bit, but he has accomplished it here through his judicious use of implied lines. The subtlety of the initial taper allows for the saddle stem's flare toward the button to end almost directly where the taper would have if it had continued straight through. This pipe is quite comfortable in the hand, as the curves of the bowl allow the fingers to wrap around it with ease, and the wide transition makes draping a thumb just as effortless. Despite the hearty size of the bowl overall, this piece is rather light, and its tightly-knit disposition makes it a tempting option for a travel companion, especially given the capacious chamber. Further softness is added by the inflated rim, with the sole bit of firmness in this profile seen in the slightly raised ridgeline just below it. A dark, inky sandblast dresses the stummel here, revealing tight undulations of concentric ring grain rippling across the bowl, with the blast adding texture in the hand, though its more shallow depth keeps things feeling welcoming. 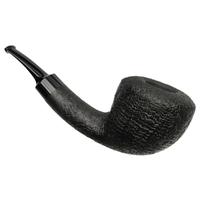 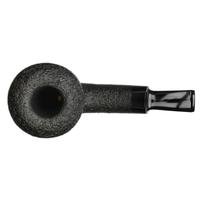 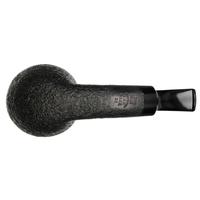 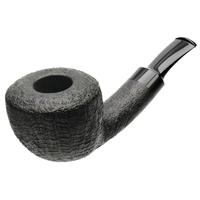