The modern style of Blowfish crafted by artisan pipe makers is often characterized by disc-shaped panels that are given prominence by encircling ridgelines. However, individual carvers take creative liberties with regards to subtlety and which elements to accentuate in each composition. In this Blowfish rendition from Li Zhesong, the Chinese carver deftly balances crisp, incredibly precise lines with a strong sense of organicism. The shank displays a tilted, lens-shaped cross section, from which emerge a pair of ridgelines along the top and bottom. One rides along the shank's topside before meeting the rim while the other ridgeline along the shank's underside sweeps up the bowl's fore before terminating at the rim, with both ridgelines created crisp, defined points along the rim. The flanks are rounded and well-defined, albeit not as exaggerated as other Blowfish renditions but instead they're pleasingly rounded.

What impresses me most about this piece, however, is the amount of detailed shaping still evident underneath the sandblasted finish. Sometimes blasted grain will blur minute aspects of the shape, and yet Zhesong has managed to retain all of this design's subtleties while showcasing the briar's stunning mix of cross grain and birdseye. A boxwood mount adorns the shank end, its pale hue contrasting the rest of the piece's extra-dark coloration with the smooth rim offering additional visual and textural contrast. Just as remarkable as the shaping and brilliant display of grain is how Li has shaped the stem base in such a way that it perfectly mimics the lines of the shank face, lining up with unparalleled precision. It's an impressive display of craftsmanship, and the piece is further endowed with extra muscularity through the shank, seamlessly blending robustness with the shape's inherent organicism. 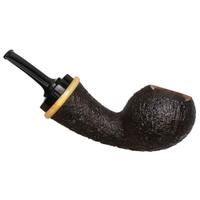 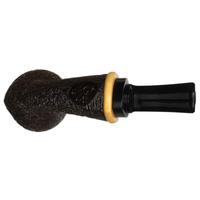 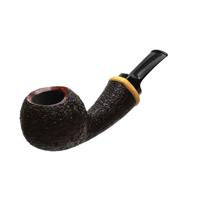