Born in Germany in 1967, Manduela Riger-Kusk relocated to Jutland, Denmark, when she was only four years old, eventually taking up pipe smoking after she finished school. Like many pipe smokers, one was not enough for her, and her desire for more pipes sparked an interest in making her own due to the cost of buying them new. As such, she found herself at the doorstep of Poul Ilsted, one of the Denmark's master carvers, who then took her in as an apprentice, teaching her his methods of drilling, shaping, and faceting. Before his death, Ilsted was widely regarded as the "master of facets" in the pipe world, and the nuances of what he taught to Manduela are evident in her work and especially in this bent Bulldog.

There's an almost preternatural marriage of firmness and softness present throughout this pipe that keeps my eye wandering over its surfaces in an effort to take in all of its minutia. While we've seen works like this from Manduela before, all of which are impressive, this particular iteration of the bent Bulldog strikes me as being particularly Ilsted-inspired, reminiscent of at least one of his works that we've come across. The bowl here, however, is a bit more bulb-like, with a poised and pert profile that's slightly less robust, but more gracile because of this. Said bowl takes on a slight flare from its pointed heel to a high-set waistline marked by twin beadlines, tapering, then, to the rim. The shank and stem comprise a fluid S-curve that's framed by a hexagonal paneling, outlining the curvature of the combination without detracting from it in a manner that's wonderfully similar to Ilsted's. This piece, however, benefits from a tapered stem, allowing a fully consistent undercurve to ebb from the button to the heel, with the top curve very nicely arcing into the transition despite being marked by a ridge. Dressing this pipe is a vibrant, natural finish that allows for the full display of dense flame and straight grain around the flanks of the stummel, its hues contrasted well by both the stem and its muskox horn inlay. 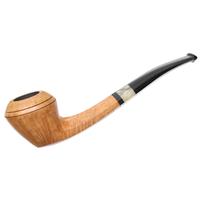 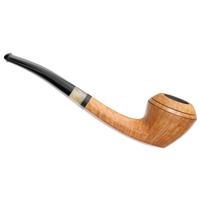 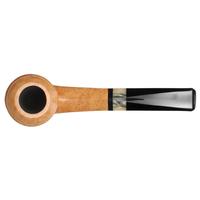 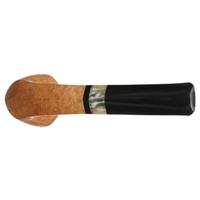 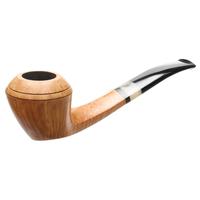 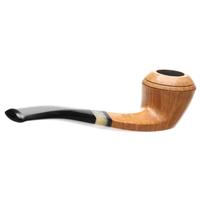