As a teenager, Manduela Riger-Kusk apprenticed under Poul Ilsted and, at first, conducted mundane tasks for the Danish carver, like polishing stems, mixing stains, and acting as a general assistant. Eventually, Ilsted instructed Riger-Kusk to fashion something at the shaping wheel, but instead of a pipe, Illsted had her fashion dice, a time-consuming process that she was made to repeat over and over again. The task, however, allowed Manduela to hone her understanding of line work and facets, and that understanding is evident when considering this Bulldog.

Like many pipes within Manduela's portfolio, this Bulldog is a demure, pocket-friendly piece that measures less than five inches in total length. Its light weight coupled with its slender frame ensures it will clench comfortably between the teeth. However, even given its gracile build, this piece displays firm, structural lines, most notably along its diamond shank, which extends through the transition and provides definition to the heel. In an homage to Ilsted, the heel is framed by two crisp facets that give the bowl's fore a pronounced V-shape, a design cue that often marked Ilsted's own renditions of the Bulldog. The form's characteristic beadlines are orientated higher on the bowl than is typical, wrapping around the domed rim itself and demarcating the innermost chamber walls from the rest of the stummel. A crisp, dark sandblast dresses the stummel and coaxes out rippling waves of growth rings across the flanks of the bowl, while a mouthpiece of blue vulcanite and twin accents of bone add further visual flair to the pipe in profile. 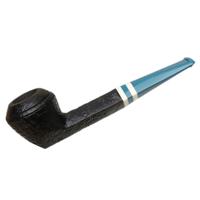 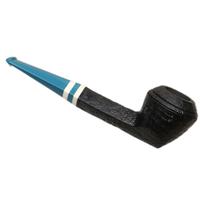 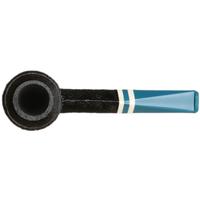 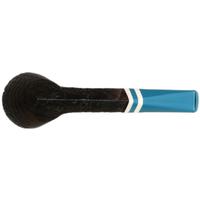 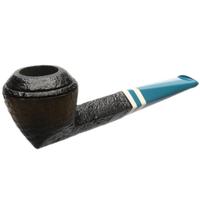 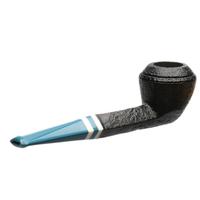