Much like his signature Tomato, Micah Redmond's Apple shapes readily demonstrate the American artisan's affinity toward chubby, compact designs. This particular example is highly reminiscent of a previous piece we received a few years ago. However, this offering is even more compact and stubbier, housing a slightly more diminutive chamber within. The sandblasted finish has unveiled a wealth of crisp texture and wavy patterns of rippling grain underneath the stummel's warm earthy brown contrast stain. For some subtle contrast, Micah has left the gently inflated rim smooth, matching the trim band along the shank end. The thick, domed base of the saddle stem is one of my favorite aspects of this piece and was an excellent design choice since it further emphasizes the chubbiness of the overall piece, gradually tapering as it reaches the lip button. It's also a jet-black vulcanite stem rather than one of Micah's colorful bakelite mouthpieces, making this an ideal piece if you're interested in Redmond's work but aren't necessarily drawn to vibrant color palettes. 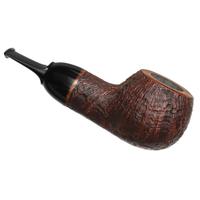 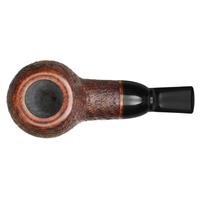 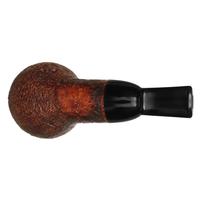 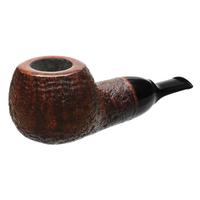