Much of high-grade artisan pipe making, and particularly that of carvers within the Danish tradition, is a narrative, of sorts, centered around a search for perfection. Many Danish artisans devote their portfolios to a narrow range of shapes, fashioning them times over as they chase "the perfect rendition," so to speak. Working with a natural material, though, like briar, presents inherent imperfections. Granted, carvers could create the "perfect" iteration of a shape, as regards proportions and lines and curves; however, the truly perfect form prioritizes grain orientation as part of the complete composition. A master carver, such as Nanna Ivarsson, could perfectly execute 99% of a pipe and yet still lack that final 1% simply because of a slight dissonance between the block's grain and the lines of the shape — an aspect only knowable once the pipe is completed.

Nevertheless, Nanna still embarks on this journey, fashioning beautiful pipes as close to the "true form" as humanly possible. For those pieces that hit closest to perfection, she grants them the designation of Fish, and while this particular Acorn rendition is surprisingly not stamped with that prestigious grade, it comes damn close.

The lines of the silhouette couldn't be more perfect — the consistent sweep of the bottom line poises the back of the shank face at the same height as the rim's fore, creating a natural compositional balance. Such a feature, as well as the negative space created above the transition hearkens to elements of this earlier Acorn we received from Nanna, which was a Fish grade. This rendition here, however, arches even more from the heel, curling almost into a semi-circle. Balancing out this foundational curve is the implied top line running across the rim and shank face — it follows a similarly consistent trajectory as the bottom line, the curve unimpeded despite the space above the transition. These two perfectly sloped arches define the piece and frame the entire composition.

Having followed the grain to form the shape, Nanna highlights the orientation in an auburn stain. At the flanks, vertically inclined striations sweep in unison with the angle of the bowl and shank, respectively. The rim and shank face feature natural plateau, while the innermost section of the rim has been chamfered slightly to reveal a pocket of speckled birdseye among the craggy plateau crown. Rounding out the piece, then, Nanna has circumscribed the mortise with a brass mount, having raised the metal and fashioned it to emulate the texture of the surrounding plateau — furthermore, the offset, undulating nature of the stem base aligns with the slight cant of the shank face, merging the stem with the briar as its curve balances out that of the shank. Only Nanna Ivarsson could fashion such a superlative piece and not lend it her highest grade, bespeaking the rigid standards of perfection she places on herself as a carver, yet awing all of us with her artistry. 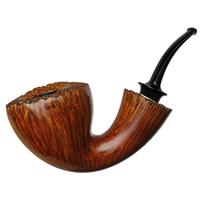 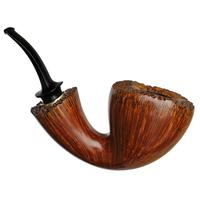 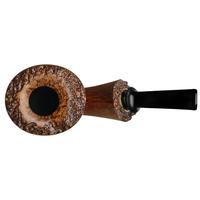 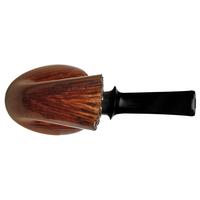 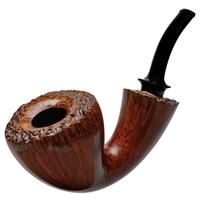 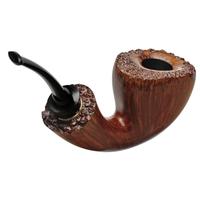 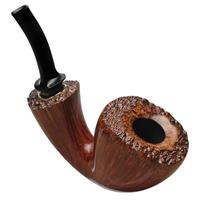