Pete Prevost bought his first pipe at the age of 18, soon thereafter discovering the larger realm of handmade pipes and purchasing a pipe kit which he spent two days shaping into something of his own, finding in this experience a passion for the art of pipe carving. Prevost had the good fortune to learn from two of the best artisans in the United States, Todd Johnson and Jody Davis, who taught him carving techniques and methods that advanced his abilities quickly, so much so that he gave up a life of touring music with the band Sanctus Real to focus on his pipe making in 2012. It was then that Todd Johnson contacted him with a revolutionary idea to establish an artisan style workshop that would offer high-quality smoking instruments at affordable prices. And thus, BriarWorks was born. Prevost now heads the BriarWorks workshop, overseeing its production, though still finds time to craft pieces of his own make such as this compact Acorn.

This is a pipe very much in Pete's own style, with soft, rounded edges and a muscular build which offers a unique portmanteau of the two aspects, and this is especially prevalent in the bowl. A crown of craggy plateau undulates atop the bowl's walls, the rim offering an organic disposition which balances the supple rounding of the bowl itself via its sharp peaks. There's a distinct blooming effect that possesses the bowl as it flares forth from its lifted heel, coming to an apex at a high-set waistline before tapering ever-so-slightly to the rim, canting forward as it does to imbue the profile with a gentle momentum and dynamic look.

In comparison, the shank is quite svelte, transitioning low on the bowl and possessed of an oval shape which balances its trim length with some appreciable girth that's quite welcome here. Married to the shank is an equally trim saddle stem of swirling grey and white Bakelite that adds a rather vibrant splash of color to the composition, its demure downturn offering an elegant disposition as well as a comfortable smoking posture. The hues of the stem contrast the stummel sharply, standing out readily against the briar's warm chestnut contrast stain that unveils some impressive striations of flame and straight grain wrapping the bowl, wile the underside showcases swirls of birdseye. 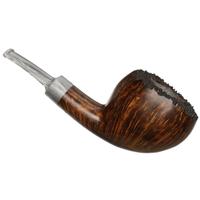 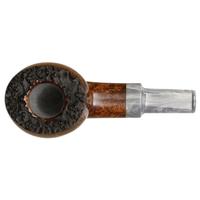 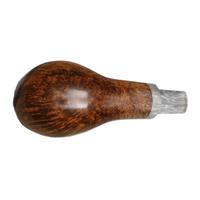 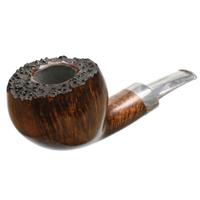 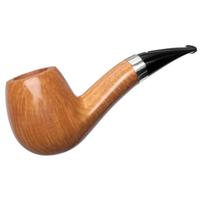 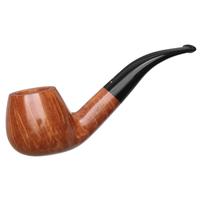 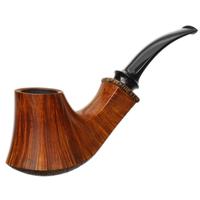