Kent Rasmussen has been working with wood since he was a child and grew up creating art, something he's been passionate about ever since, so much so that, in 1988, he began a career as a modern artist. In 1994 he carved his first pipe, more an experiment than anything else, though in 1998, after losing interest with the realm of modern art, he began carving pipes again, meeting Teddy Knudsen in 1999: a man who showed him that pipes themselves could be art. Armed with the knowledge that he could combine his passion with his work, he redoubled his efforts yet again, making artisan carving his new occupation and creating pieces such as this singular take on the Tomato.

There's a technique within the realm of artisan pipe making that I have begun to refer to as cradling, for lack of a better term, as it gives the impression that the shank is cradling the bowl. This particular method of carving places further emphasis on the bowl through the use of a stylistically extended shank that pushes through the underside and usually terminates at the heel, raising the bowl into some prominence, giving more definition to its flanks, and lending it the appearance of some softness. Here, Rasmussen has taken that approach to the extreme, utilizing a pair of ridgelines at the underside of the shank to carve a gradually tapering crest that fully wraps around the fore of the bowl, curving through its waistline and dissipating just a few hairs short of the rim. The shaping of the shank and stem outside of this is massively impressive in its own right, with the shank flicking up out a rather wide transition and flaring to meet a broad-based saddle stem that continues the flare and is fitted with an accent of masur birch. The bit is carved with a quartet of ridgelines through the flanks, the lower two of which match those present on the shank, the entire aft of this pipe rich with visual intrigue.

All of this is not to say that the fore isn't lacking in intrigue, as here we see that aforementioned cradling, as well as the alluringly plump bowl that dominates the outline. Its overall shape prioritizes breadth over height, keeping its focus on the curvaceousness at its walls and the fullness of its waist, the wealth of contours here filling out the space of the hands and fingers extremely well and making this pipe a joy to hold. An inward sloping rim tops the bowl and allows for easy loading of your favorite blends, a practical complement to this sinuous, painstakingly shaped piece of artisan work from a renowned master of the craft. Dressed in a vibrant auburn stain, the flanks of this piece showcase a dense array of wrapping flame grain, surrounding the bowl and leading the eye to the rim, where a generous smattering of birdseye populates the surface. 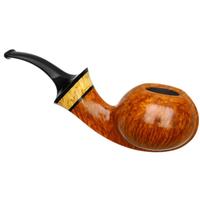 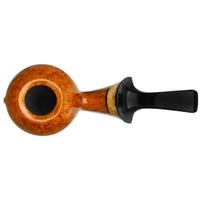 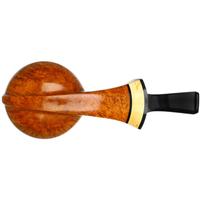 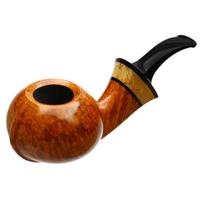 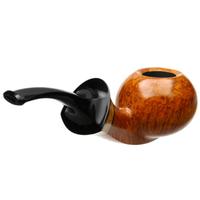 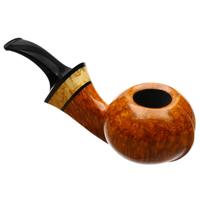 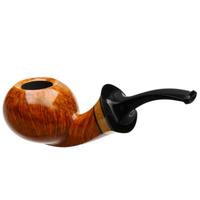 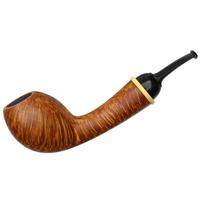