Since 2015, we here at Smokingpipes have hosted the American Pipe-Making Exposition: a celebration of pipes and pipe makers that calls upon artisans from all over the country to unite their work under a central theme while being free to showcase their signature style. The theme for 2022 was Calabash engineering, be it classic or reverse, and Ryan Alden has taken the idea of a Calabash to a remarkable extreme in this "Scorpion Tail" variant of the shape.

This is undeniably the most organic, evocative shape that we've ever seen from Alden and personally my absolute favorite, as it strikes a measured poise between art piece and functional pipe, encapsulating the essence of its natural inspiration. While normally I would talk about what stood out to me and what struck me upon first viewing this piece, I can't seem to find any singular element that leapt out at me more so than the entire pipe itself. Its predatory posture, immense sinuosity, wealth of texture, and proud stance all unleash themselves upon the eye shamelessly in a way that's both arresting and alluring.

Bamboo is not a material that we've seen Ryan use too often within his portfolio, and this is doubtlessly the most we've ever seen him use at one time, with 14 knuckles of the dense grass going into the creation of this pipe. What separates this piece not only from his other works with bamboo but from many others as well, is the extremely limited inclusion of briar, as the burl is utilized solely for two of the included bowls and to marry both lengths of bamboo at the middle of the stummel. Yes, both lengths, one holding the stem and the other holding the bowl and Calabash chamber: The two bamboo sections are paired with one another at an outcropping of briar that not only stylistically continues the organic expansions of the knuckles, but pushes out and spreads at the bottom to create a sure-sitting platform.

Both stretches of bamboo are curved delightfully, with the aft side's meeting a band of black vulcanite and long, deeply curved matching stem, the material continuing a divot present in the surface of the left flank. The fore end, however, doesn't stop its upward curve until the bowl is oriented almost directly above the briar platform, and this rearward sweep of the bamboo provides a look that's reminiscent of a scorpion's tail reared back in a threatening display. The similarities to the stinger-equipped arthropod don't end there, however, as the lengthy stretch of shank and stem curve in a way that evokes the look of the tail as well, while the entire pipe's outline resembles the venom gland and sting of the stinger itself.

Included with this pipe is a stand made from a variety of different hardwoods that can hold two of the three included bowls which come with the pipe as well. The first of these bowls is a tanblasted, Bulldog-like affair that flares out to a beadline-wrapped waist before tapering to the rim, the beadline itself continuing the rhythm of the bamboo's knuckles and the lower half of the bowl being made from spalted pecan wood. The second of these bowls is a standard mushroom cap, also made from briar and treated with a crisp black sandblast that matches the briar platform at the pipe's midsection. The third and final bowl is made from domed meerschaum, calling back to the gourd Calabashes of old and wonderfully contrasting with every other color present in the composition. 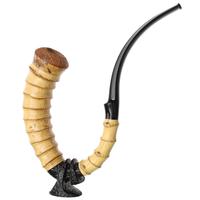 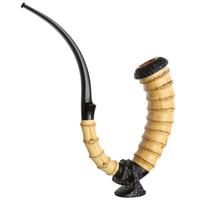 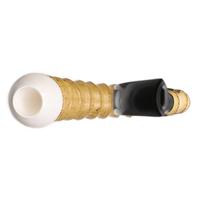 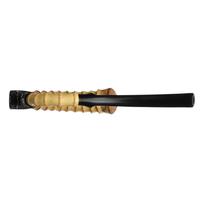 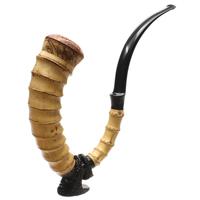 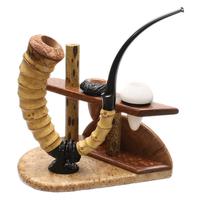 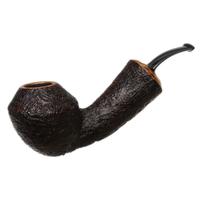 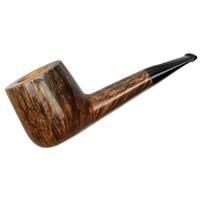