Smio Satou is unquestionably one of the great Japanese masters of pipe making, belonging to the craft for multiple decades and having worked previously for Tsuge for more than 25 years. Throughout his career, he has finely honed a distinctive aesthetic which pairs measured, flowing lines with organic flares and a keen balance that places emphasis on every shaping detail of a composition. Satou additionally comes from something of a pipe making pedigree, as his father worked for the first briar pipe factory in Japan during the late 1940s, and, following World War II, even repaired pipes for General Douglas MacArthur. This bent Dublin is a signature shape from the master artisan, and demonstrates his shaping style excellently, as well as his unique finishing method.

I'm quite taken by the shape of this pipe, as there's a defined sense of structure to it, yet it's also possessed of a demure fluidity that implies a bit of softness. The bowl here contributes the majority of this structural element, as it sits atop a spurred heel which immediately reminds me of the Pickaxe, though not curved or elongated. From here it takes on an easy flare to the rim, meeting a firm ridgeline that marks the start of an easy inflation at the rim's surface, one which overlooks a chamfered chamber entrance. The flanks of this bowl are compressed, lending it an ovoid shape which keeps the spatial impact of this pipe more modest than it would be otherwise, and lends it a wonderful feel in hand when cradled. The most striking element of the bowl, however, is the truly masterful use of lines, as the aft wall flares in proportion with the fore, creating an implied line through the shank and transition that allows you to see its travel to the rim despite it being interrupted. It took me a while to wrap my head around the shaping of the shank, but when I recognized what was happening, I was entranced: The shank here takes on a vertical taper and a horizontal flare at the same time, lending it a shape that's both ovoid and circular and achieving this in a way that seems effortless. Said shank takes on an easy, consistent angle out of the bowl with just a touch of curve as it makes its way toward the end, meeting a gently bent stem whose base is adorned with a colorful band of traditional Japanese tsuishu — the result of a time-consuming process of laying colorful lacquers.

The finish of this pipe is something unique to Satou, as, on top of the stain which he covers the stummel with, he additionally paints on a layer of clear urushi lacquer which protects the wood and keeps its shine for longer. Different makers have made pipes with urushi before, but Satou is among the most experienced and among the few to clear-coat his pipes with the substance in order to provide additional luster and durability. The aforementioned stain adorning this pipe is quite stunning: a vibrant ruby-hued contrast that unveils dense, wrapping flickers of flame grain which encircle the shape on all sides, while the rim is awash with a sea of swirling birdseye. 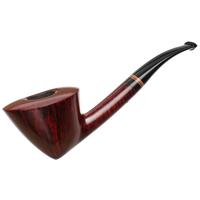 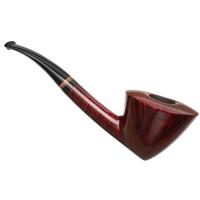 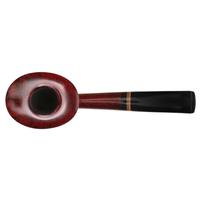 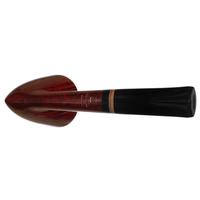 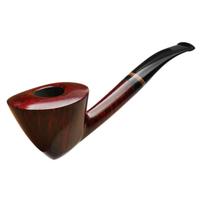 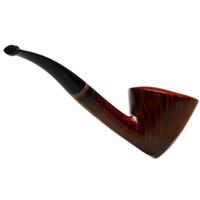 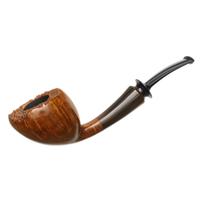 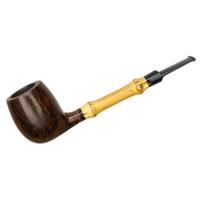 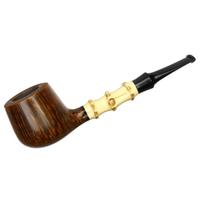