Lasse Skovgaard is the son of renowned Danish pipe maker Benni Jørgensen, and first began making his own pipes at the age of 16. By 18 years of age, he was making pipes for the famed W.Ø. Larsen workshop, working alongside greats like Teddy Knudsen, and a year later began making the workshop's prestigious Straight Grain pipes. In 2004, at the age of twenty, he began selling artisan pipes stamped with his own name, and has earned a place among the ranks of accomplished Danish artisans with his own unique, organic style. The Blowfish shape is both difficult to execute well, and well-adapted for showcasing masterful talent, and with this rendition Lasse both conquers the former and makes ample use of the latter.

A Blowfish is more often seen as a more horizontal design, but Skovgaard often takes the shape more vertical, even crafting one such pipe as a Churchwarden. While not as willowy as a Churchwarden, this iteration certainly falls on the more vertical end of his spectrum, with a high-kicking shank paired to a well-bent tapered stem that takes the overall length past six-and-a-half inches. The proportions do not appear elongated though, but well-balanced, with the bulbous bowl seeming to unwind naturally from the end of the sinuous S-curve of shank and stem.

The stummel is a triumph, no two ways about it. Lasse has morphed the central panel that defines the shape into something considerably more organic and sleek than most Blowfish, generating a smooth sphere in profile, while displaying a unique concave paneled facet when seen from the fore. All of this is exquisitely executed in accordance with the briar's grain, of course, causing a mesmerizing array of birdseye to dominate the right flank, flexing and receding in the nuances of a surface that swells in the center, then recedes to another concave aspect, before advancing outward to a crisp, but supple encircling ridgeline. It all is made quite stunning under a brilliant contrast stain and glossy smooth finish, and the fit and finish inside and out are outstanding. I am a fan of Lasse's work, and have to say this is one of the finest pieces we have seen from him yet. 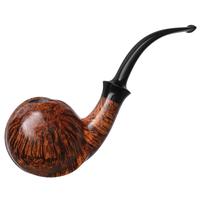 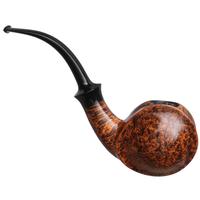 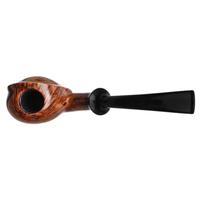 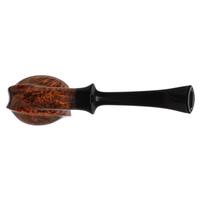 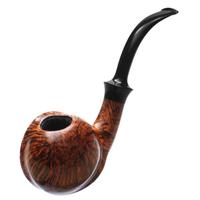 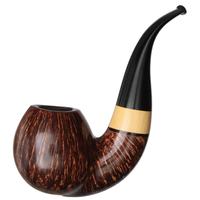 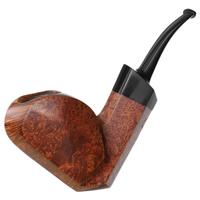 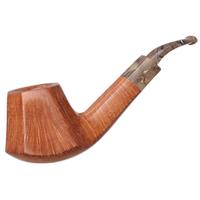