Danish carver Lasse Skovgaard's career as a pipe maker began at age 18, when he went to work for W.Ø. Larsen, the legendary Copenhagen workshop where a bevy of fellow artisans have either worked or for which they've designed. Skovgaard also benefited from tutelage via his father, renowned carver Benni Jørgensen, and from Teddy Knudsen. Lasse struck out on his own as an independent artisan in 2004.

Like many of his colleagues, Skovgaard boasts an anthology of pipes that range from fairly reserved classics to rather sculptural examples. This organic bent Apple is a great example of more conservative shaping, but in no way does that translate to boring. It's quite the opposite, really. The supple, gently rounded bowl features a lifting heel and a forward sense of momentum, thanks to its charmingly plump sides and seemingly protruding fore. A distinctive ridgeline descends from the rim on the right flank, its waviness following the soft curvature of the bowl through the heel and up through the shank. Intriguingly, the artisan has fomented a very subtle and extremely gentle line along the left shank that's more felt than seen. The shank face itself is lens shaped, followed by an expansion ring near the base of the vulcanite stem that continues that rhythm. Muscular and compressed, the bowl-centric stummel is wearing a gorgeous contrast stain, illuminating tight-knit licks of flame grain across the bowl, while the underside of the pipe is saturated in stunning birdseye. Skovgaard's intuitive eye for shaping according to grain is clearly demonstrated in this minimalistic piece that should score a prominent place in a discerning collection of Danish pipes. 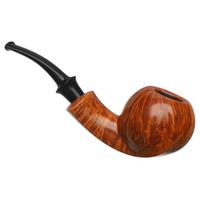 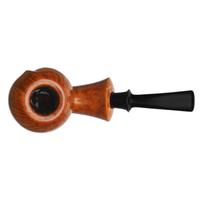 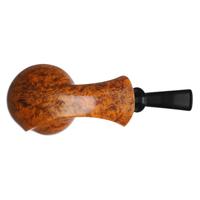 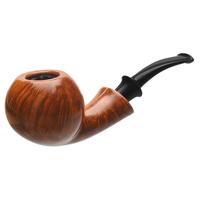