Lasse Skovgaard comes from a pipe-making pedigree — his father accomplished Danish artisan Benni Jørgensen — and, as such, has continued in his father's footsteps. At the age of 16, Skovgaard started making horn tampers at the W.Ø. Larsen factory, later moving on to craft their select-grade pipes at age 18 before rising to carve the storied marque's Straight Grain pieces at 19 years old. During a meeting with family friend and legendary artisan Teddy Knudsen, Lasse was convinced to bring a selection of his own pipes with him to the 2004 Chicago Pipe show, selling his entire stock. The next year he did so again, after which he devoted himself to honing his craft with his own work, creating pipes of his own distinctive style.

Rather conservatively designed compared to some of his other work, this Horn showcases an easy fluidity throughout its build that manifests as a gentle S-curve in profile. The stem ebbs out from a base which flares from the junction, taking on a demure downturn to the button and showing off the rearward slant of that aforementioned base quite well, with the base also starting the travel of a low-profile ridgeline that runs the length of the stummel. From the junction and forward, this piece is possessed of a consistent expansion that sees it flare out just a touch more toward the rim, the entire time curling upward and offering ample gesture and dynamism for the eyes to appreciate. The ridgeline here serves not to firm up the composition, but to reinforce its outline, and despite its slightly more rigid texture, it maintains the roundness of the briar and the comfortable feel in hand which that lends. The outline of the rim displays a shape that's something of a soft-lined Reuleaux triangle, different from that of the stem base and lending us insight into the contours of the bowl. Dressed in an inky sandblast, this piece is covered in plenty of texture that's sure to keep the fingers engaged, the rim and a broad band at the junction left smooth to offer contrast with their vibrant mahogany hues. 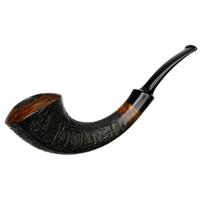 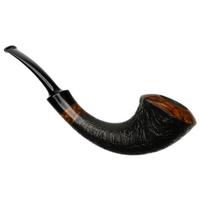 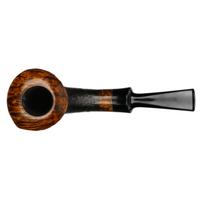 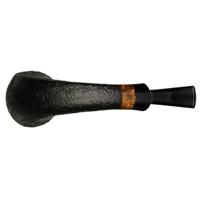 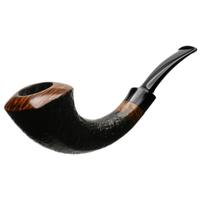 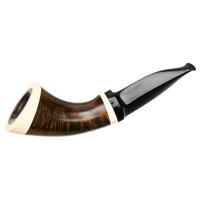