As the son of renowned Danish artisan Benni Jørgensen, Lasse Skovgaard was born into a pipe-making pedigree and found himself coming into the fold at 16 years old, when he, like many others before him, began work at W.Ø. Larsen. His start at the esteemed Danish workshop saw him carving buffalo horn tampers, all while practicing pipe carving on his own before. At 18, he was finally able to make the firm's Select grade pipes. Before long he was carving their Straight Grain pieces and, after urging by family friend Teddy Knudsen, he began making his own pipes and sold out two years in a row at the Chicago Pipe Show, beginning his career as an artisan with great success.

Skovgaard's style is reminiscent of the Danish Fancy movement, though with the generous application of a distinctive organicism which pervades nearly all of his work, making many of his pipes unique pieces of sculpturally oriented artistry. This bent Apple is no exception, presenting with a build that poises its rotund bowl at the end of a sinuously bent shank and stem combination, with the stem itself a smartly curved length of black vulcanite that nestles into the shank face. Said shank face comprises a dramatic flare out into a field of plateau, dipping in where the stem marries the briar and coming to a curved point at the right flank for a distinctive teardrop-shaped look. This point marks the start of an extremely firm, pronounced ridgeline which curves through the underside and follows the outline of the shank until it reaches the transitional area, where it flows across the bottom of the bowl and rises, sweeping over the left fore of the bowl and rising to the rim. Up front, said bowl presents with a lovely asymmetric look that sees the entire build cant to the right, opposed stylistically by the progress of the ridgeline which sits nearly directly opposite of the wall's rounded peak. The rim is inflated and slopes into the chamber to allow for the easy loading of tobacco, the walls holding it thick and dressed in a warm chestnut hue that reveals striking flickers of flame grain throughout the flanks of the stummel. 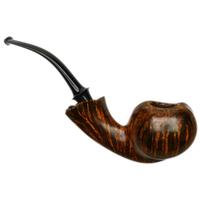 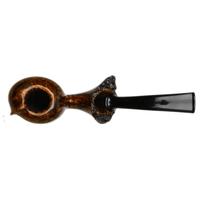 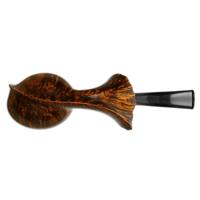