Lasse Skovgaard was born into the pipe world. The son of legendary carver Benni Jørgensen, Skovgaard began his journey into the world of artisan pipes at the age of 16, crafting buffalo horn tampers for W.Ø. Larsen and carving his first few pipes in his spare time. After much practice and around 100 more pipes, he was hired to carve Larsen's two-tone and select grades and, a year later at age 19, was promoted to carving the marque's renowned Straight Grain pieces. After being encouraged by family friend Teddy Knudsen, Lasse took 12 pipes he had carved himself to the 2004 Chicago Pipe Show and sold every single piece, setting the stage for the next year where he once more sold out his stock. Since then, Skovgaard has gained a reputation for his excellent workmanship, represented here by this bent Apple.

I'm immediately struck by the relatively restrained nature of the composition compared to some of Lasse's other designs, with this pipe showcasing a refined sense of line and fluidity. There's an elegant character about this pipe's build which keeps drawing my eye toward its focal points thanks to its pleasing curvature, with the shank and stem sweeping out and upward from a cheeked transition, poising them for comfortable smoking and leading toward the bowl. The combination here is actually one of the focal points, for the left flank of the shank's underside is traced by a firm ridgeline that runs from beneath the bowl to the base of the stem. What makes this truly impressive, however, are the dual accents that Skovgaard has affixed to this pipe: a silver band at the junction and a horn fitment at the base of the stem. The ridge flows through both of these, with the raised silver coming to a point, extending past the junction and creating a small recess for the stem to nestle into, the point catching that of the stem's base and keeping the stem well-aligned and easy to properly align.

The ridgeline at the left side doesn't just show off Lasse's talent for shaping near the shank, but serves to support and reinforce the presence of the bowl, all while creating a firm outline that makes the view from either flank different. The lifting effect beneath the bowl thrusts its rotund silhouette into prominence and works well to show off its plentiful plumpness, low-set waist, and arcing taper to the rim. Of course, the wealth of curves up front lends the bowl an extremely comfortable feel in hand, and the reassuring thickness of the walls ensure your hands are insulated while smoking, the inward slope of the rim allowing for easier loading of tobacco. In addition, this is one of the few pipes we've received from Skovgaard to have earned his Lion grade, the mark defining those pipes that are his finest work and which showcase the best grain. This grain can be seen beneath a vibrant auburn contrast stain in the form of dense streaks of flame grain which follow through the outline of the pipe and wrap around the bowl, the underside awash with birdseye. 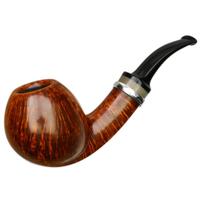 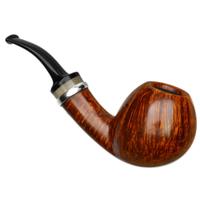 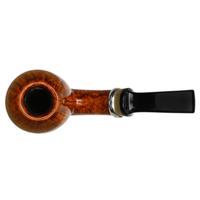 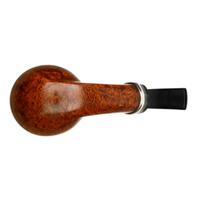 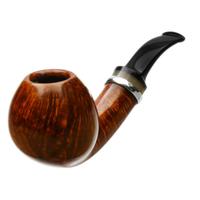 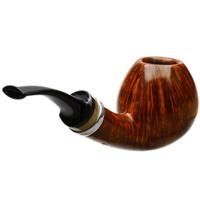 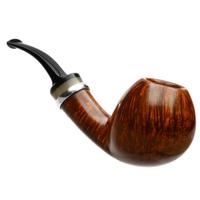 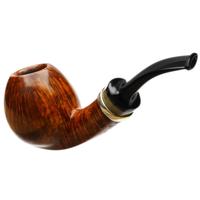