Beginning with Bo Nordh, many, many carvers have crafted their own renditions of the famous Nautilus shape, inspired by the shell of its namesake marine mollusk. To my knowledge, however, this is the first to be fashioned from the actual shell of that same mollusk. Todd Johnson is no ordinary carver though, so it's no surprise that he would seek to collaborate with Mother Nature herself.

Nautilus shells present one of the finest natural examples of a logarithmic spiral, and with its pleasant, unyielding curvature and complete absence of straight lines, it's no wonder Todd and others have continued to look to it for inspiration. To fashion this literalist rendition, Todd selected an especially striking specimen, its shimmering exterior showcasing a sense of bright, iridescent radiance, with hints of rouge, mauve, coral, and a touch of azure blue. The carver clearly sought to elevate this aesthetic, making use of certain cues which complement elements of the palette and style.

To achieve this, he shaped a briar form to set within the shell itself, marking where the bowl would be drilled, and leaving a slip of clearance between the briar's exterior and the shell's inner surface. From here, he filled in the space with a pearl blue resin, followed by an opaque, waterproof and heat resistant epoxy flecked with hints of coral, violet, and sky blue colors, along with a hint of diamond dust, allowing it to catch light in a similar way to the shell itself. He paired it with a split stem of swirled amethyst and off-white bakelite, set by way of a stainless steel reverse tenon arrangement, and framed by a matching bakelite base. Altogether, it's a stunning piece from the American carver, and one of the most unique smoking instruments I've personally encountered. 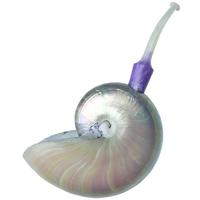 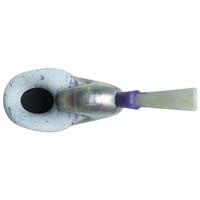 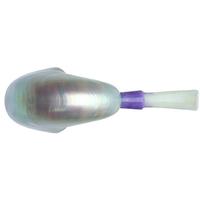 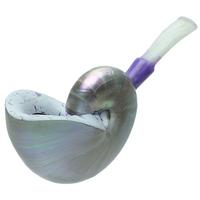 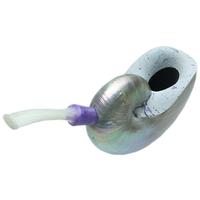 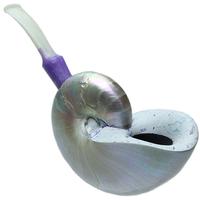 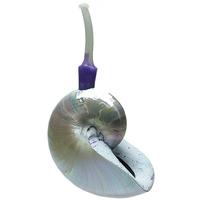