Influenced by expert Danish and Japanese artisans, such as Lars Ivarsson, Tom Eltang, Jørn Micke, and Hiroyuki Tokutomi, Todd Johnson has led the charge in bringing design elements from the Danish and Japanese traditional into the modern American realm of pipe making. Such a deep understanding of these styles (no doubt also informed by his undergraduate and masters degrees in Aesthetics) as well as his expert skills as a craftsman (even before pipe making, Todd was an accomplished woodworker) have allowed and inspired Johnson to push the envelope of what is considered "normal" in the world of pipes. Many of the ideas Todd has implemented in his own work have inspired entire trends within the artisan world, such as his work with bakelite and with split stems. He's never one to shy away from a challenge and is constantly pushing himself to create pieces that defy what was thought possible in pipe making (just look at his Nautilus entry in 2018's American Pipemaking Exposition).

The prowess and artistry Todd has displayed over the years culminates in this year's Expo, which also marks the American carver's 20th anniversary as a pipe maker. He's presented us with a version of his signature Origami shape. The form is defined by a Dublin-esque bowl set with a concave fore and crisp ridgelines creasing each flank. Most often, Todd softly domes the rim, but in this rendition, he's left the rim crowned in craggy, dark-stained plateau — except for the chamfered, innermost section, which is smoothed and auburn-stained to match the rest of the stummel.

While the bowl shape is unique to Todd and one of his signature design's, it's not what makes this piece the standout it is: The section of bamboo Johnson has incorporated steals the show. We talk about certain pipe chart shapes having an S-curve (most notably the bent Billiard and Oom Paul designs). Well, this bamboo has its own S-curve, flowing sinuously into the briar and studded with an extra-gnarly array of nodes and knuckles. Instead of cutting the bamboo and fitting the stem flush against the face, Todd has maintained the organic medium's serpentine curl and drilled the mortise into the top of the first bend. The resulting bamboo "tail" underneath the stem base adds yet another flourishing curve and an interrupting line to the profile that Johnson has echoed at the bowl's sharply pointed heel.

Elsewhere, the piece is a lesson in balancing lines — the recurve of the vulcanite stem perfectly matches the bottom curve of the bamboo, further embellished by the bowl's forward-leaning taper. Stunning craftsmanship and cohesive design elements aren't all that Todd focused on though; he's also selected an immaculate piece of briar, the block's contrasted flame grain oriented beautifully across the bowl, with the flanking ridgelines conforming to and aligning with the underlying strands of grain. From form and finish to creativity and craftsmanship, it's no doubt deserving of Johnson's highest grade: Phalanx "Q." 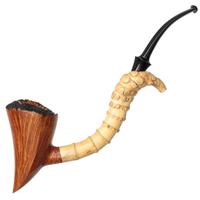 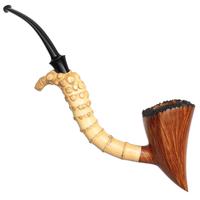 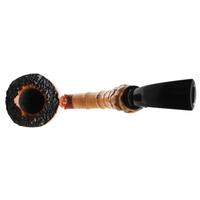 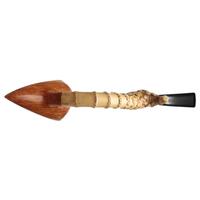 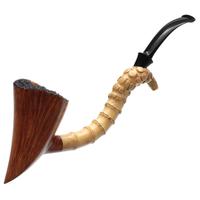 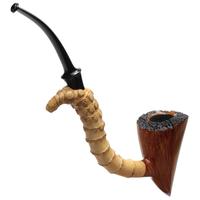 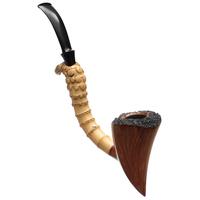 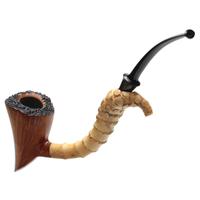