The Mushroom design was notably pioneered by the legendary Jess Chonowitsch and has been reinterpreted by countless carvers within modern pipe making. The shape is primarily characterized by a ridgelined bowl with a domed rim rising above the equatorial hard line, but still offers artisan carvers an abundance of creative avenues to explore. Such is this case with this muscular interpretation from Todd Johnson that fits in well with the American carver's portfolio of organically inspired designs and demonstrates his penchant for amplifying a pipe's proportions while keeping things expertly balanced.

Initially, this piece resembles a Rhodesian, the bowl more pronounced and visually separated from the shank. However, instead of the Rhodesian's conventional beadlines and tapered rim, this design utilizes a firm ridgeline and a more domed-like rim. The broad bowl offers a substantial in-hand presence, yet conforms comfortably when wrapped around the thumb and forefinger. I don't know how I made it this far without acknowledging the stellar, craggy sandblast Todd has applied to this pipe but it certainly deserves attention. It's fascinating how rugged the texture of the stummel is, yet the briar's growth rings are well-defined and flow upward to the tapered rim which is studded with a mix of undulating grain and specks of birdseye. An accent ring of black and white ebony simultaneously complements and subtly contrasts the rest of the piece's jet-black color palette before leading to the gracefully bent saddle stem, which promises comfort and excellent smoking properties. 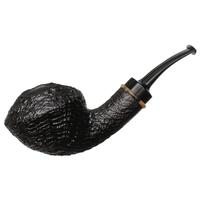 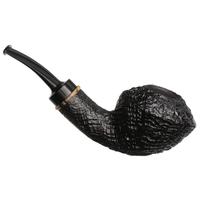 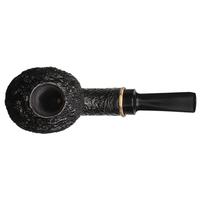 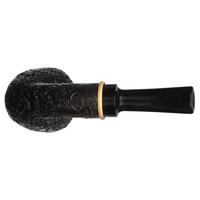 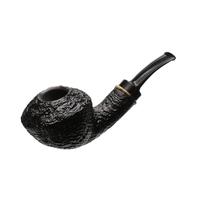 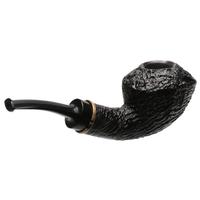 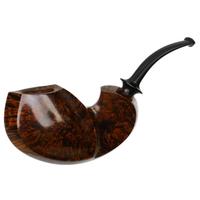