One could describe the American artisan pipe-making movement as an aesthetic journey marked by two waves. The first of these waves occurred in the '70s and '80s and primarily comprised pipes that reflected Italian and Danish Fancy design cues — pipes of bold, dramatic proportions, often with flourishing shaping cues and evocative styles. The second wave began in the '90s, and it prioritized the shaping approach championed by Danish and Japanese artisans. While both shaping styles remain prevalent today, this second wave is more ubiquitous across recent American pipe makers. Todd Johnson was among the pioneering carvers during this second wave, and his work, design style, and tutelage have helped pave the way for many modern American artisans since.

Educated in Classics and equally adept in the culinary arts, Todd is an artist in every aspect of life, and his pipes reflect not only a clear understanding of aesthetics but also expert craftsmanship executed to maximize a briar block's potential. In this, Todd Johnson pipes combine superlative form and function for a true realization of what it means to craft functional art in the form of pipes. This Blowfish reveals that stylistic and engineering acumen, while also revealing Todd's admiration for Japanese pipe design.

The Blowfish — or Fugu — is an iconic Japanese shape, and it's become a staple design within the world of handmade artisan pipes. While its specifics can vary from rendition to rendition, the Blowfish is characterized by a cross-grain orientation, with birdseye saturating the flanks and a central panel of cross grain bisecting the length of the pipe. This version from Todd orients that panel more toward the left side, following the natural outline of the briar itself, and the left flank features a flat, paneled disposition while the right side remains plumply rounded. At this right side, the edge of the central panel descends toward the transition and flicks outward — an oft-seen element of the Blowfish and one that resembles a protruding fin. To contrast, the left edge of the central panel wraps the flank to frame the briar's birdseye patterns.

As the cross-grain panel sweeps across the bowl, it curls down through the underside and into the shank, initiating that element's paneled nature for an angled, asymmetric cross section. The shank end, then, is capped by a ferrule of creamy horn, shaped perfectly to match the shank's facets, and while the hand-cut stem fits via a military mount configuration, the mount is comprised of briar, with the horn covering the exterior. Briar is evident along the inner section of the mortise opening, with horn extended around, and a brass inset lines the opening for added reinforcement and a touch of accenting flash. The horn offers a touch of contrast against the stummel's natural finish while still maintaining a light color palette for a stunning presentation that's earned Todd's Hoplite grade. 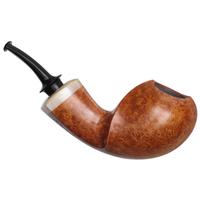 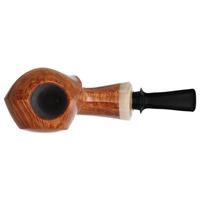 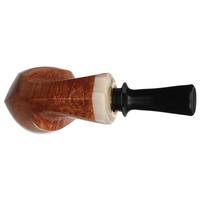 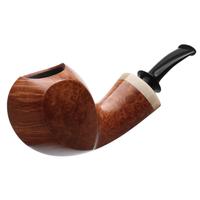 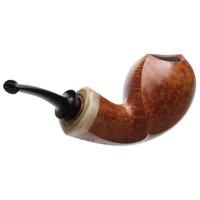