Today, many artisan pipe makers, especially Americans, look to and draw inspiration from iconic Danish carvers, regarding both style and technique, and a number have traveled to Denmark and learned from those revered artisans in person. That wasn't always the case though. Before the widespread use of social media effectively shrunk the world and allowed for easy, instant communication and the sharing of ideas across continents, many pipe makers were exposed to each other's work only at pipe shows and personal visits, relying on figuring out the tools of the trade on their own or seeking instruction from more experienced carvers who lived within visiting distance. As such, though the Danish style and technique of freehand pipe making had been utilized in Denmark since the 1960s, their use worldwide didn't become ubiquitous till much later. For American pipe making, Todd Johnson was among the first to seek out the Danes and learn their method of pipe making, and he, in turn, has since passed that tradition on to many younger carvers throughout his career. That said, while Johnson has championed the engineering and techniques of Danish artisan pipe making, he's developed a style all his own — one that often results in gorgeous, organic forms that seem more to have grown from nature rather than having been shaped on a sanding disc. This bent Dublin Sitter is one such piece, and its shaping beautifully maximizes this briar block's specific grain patterns.

Crafted in September of 2021, this bent Dublin was carved by Todd Johnson from a block of briar that he's had since 2008. The pipe itself is brand new, but the briar it's fashioned from has been curing and aging for over a dozen years. Reminiscent of a Cherrywood, this pipe sits sturdily upright upon a flattened heel, but the bowl is that of a broadly flaring Dublin, with the serpentine shank-and-stem combination curling behind. Every curve and line of this composition has been artfully designed around the briar's natural grain pattern: The flare of the bowl mimics the trajectory of the flame grain, and the curved trajectory of the shank follows the expanding nature of the grain it showcases.

Grain, though, is a naturally occurring element, and it rarely conforms to our definition of "perfect" or "consistent," often changing its trajectory. Todd has managed that inconsistency expertly and shaped this pipe accordingly rather than remaining bound to a symmetrical design. As such, the pipe leans ever-so-slightly rightward when viewed from the smoker's perspective, and such asymmetry captures the full potential of the grain and makes this piece seem as if it grew naturally into this shape. The naturalistic motif is furthered by the plateau along the rim and shank face, and the base of the saddle stem — comprised of Ivorite — nestles into the shank as an integrated aspect of the composition. The lines of the stummel frame the grain in brilliant array, and the downturn of the stem perfectly matches the upward arc of the shank, making for an artistic smoking instrument that bears all the class, elegance, and craftsmanship acumen for which Todd has become renowned. 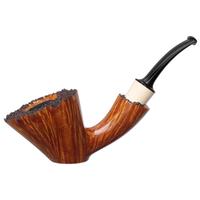 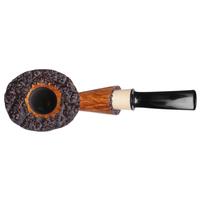 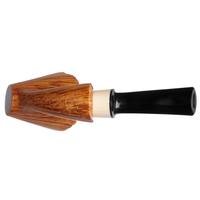 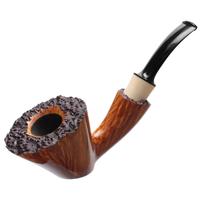 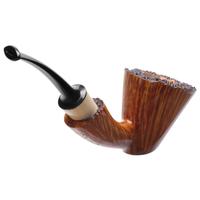 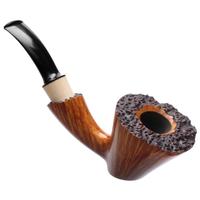 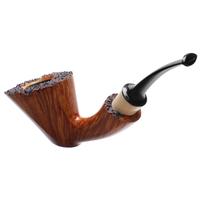