The Volcano is a familiar shape that many artisan pipe makers have expanded upon, rendering variations with artistic individuality and dramatic flourishes. At its root, the Volcano is a bent Brandy interpretation, featuring a bowl that flares upward from a base demarcated by a crisp ridgeline, and Todd Johnson's signature Samurai renditions reinterpret the form with complex shaping cues and recognizable appeal. In general, Todd's Samurai Volcanoes are distinguished by a flicking spur — not unlike the characteristic kabuto helmet of traditional samurai armor — just beneath the transition, and this version features that defining cue while also embellishing it with myriad flourishes throughout.

Todd often draws inspiration from the Japanese pipe-making tradition, and such an influence is displayed in his aptly named Samurai Volcano renditions. Many Japanese pipe makers prioritize organic shaping cues in their pipes, and asymmetry is an oft-seen design cue, following the not-always-uniform grain of the specific briar block being carved. Todd's leaned into that for this piece: The bowl features an upward taper and a ridgeline at the base, but that ridgeline meanders in a wavy array and separates the bowl from a very bulbous heel while also informing the Samurai's defining spur. Such a heel contrasts against the ridge's structure for a supple organicism that's furthered by a kiss of plateau at the heel's center.

The rim likewise follows meandering orientation, echoing the base's ridgeline in a concave line that unites the bowl's shaping from top to bottom, the aspects further united by a vertical ridgeline at the fore that connects rim to base. This motif of accenting ridgelines, then, continues at the lenticular shank, which features crisp flanking ridges but in a tilted posture that adds asymmetry and matches the bowl's rightward leaning — the flaring, ridgelined, and asymmetrical shank calling to mind many pipes fashioned by Jørn Micke. Todd has long cited Jørn as a pipe-making influence, and the late Danish carver also earned particular renown in Japan. As such, the Micke-like shaping of the shank is a fitting homage from Todd and fits in well to this Samurai Volcano's Japanese aesthetic. All dressed in a rich, walnut stain, vertical grain follows the shaping of the bowl while birdseye adorns the underside, beautifully cohering the expert craftsmanship of an artisan carver with nature's own canvas. 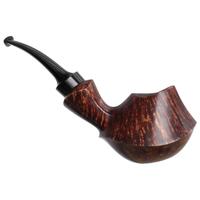 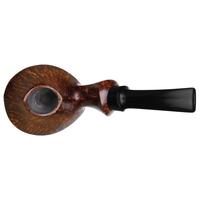 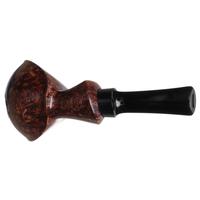 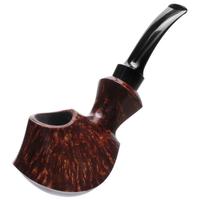 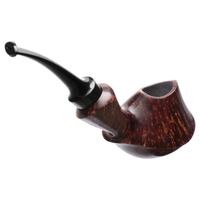 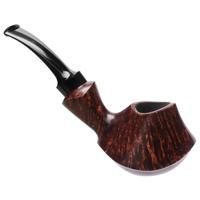 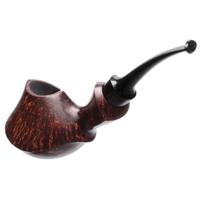