Todd Johnson continues to amaze with his unique combinations of precise design and artistic composition, this time with a new variation on one of his signature shapes: the Sarcophagus. The Sarcophagus is elongated, low, and broad, a bit like an Eskimo, turning up at the end to create the mass necessary for a squat bowl. Here, Johnson has turned the design completely on its head, or, more accurately, folded it in half, while keeping the core design elements intact.

One of the defining cues of the Sarcophagus is twin ridgelines running up the flanks, here following the pipe's curve down and back up again from rim to stem base. Todd has added a third ridgeline in this rendition for an even more bespoke presentation, growing seamlessly from the undercurve of the lens-shaped shank end, growing in strength as it rides the heel's curve, until finally forming a point at the fore of the unique rim. From above, the rim forms a dynamic V up front, with a curve pushing the aft aspect, making me think of a punch dagger suffused with implied momentum. The inner edge is chamfered, with nearby softened ridgelines mirroring the outer perimeter, the whole of which is packed with ruby-stained birdseye. I see the birdseye as Damascus steel, layer upon layer of beauty boasting of the dagger's strength and longevity.

I got lost in the rim there (and suspect you will too), but the feature I find even more intriguing is the side profile. This does not look like a bent pipe; it looks like a straight pipe that has been bent, appropriately fitting its name, and a nuance that only a pipe artisan of Johnson's caliber can imagine, let alone accomplish. He has shaped according to the grain to make growth rings radiate equally in both directions from the heel, a master stroke that makes the heel seem like the middle of the block of briar, not the bottom. The more I look at it, the more I am impressed with the precision with which Todd accomplished this feat, and simply cannot overstate how powerful the affect is, as if he somehow really folded the briar after he finished the pipe.

The fit, finish, and details are all worthy of the bespoke design, of course. A low profile sandblast and ink-black stain dress the tight stacks of ring grain climbing both bowl and shank without spoiling the precise line work, and a thin band of smooth briar at the shank end provides a matching complement to the rim. The stem base continues the shank's lines, with arches to its thicker base and flanking reductions in width both evoking the same curvature as the stummel's sweeping heel. The mouthpiece is a beautiful split-stem arrangement, incorporating brindled vulcanite of mesmerizing hues as it curls to meet one of Todd's precisely hand-detailed lip buttons. This pipe is living art, breathing with a life of its own through the sheer strength of its perfection, and will be a much-coveted centerpiece in even the most distinguished of collections. 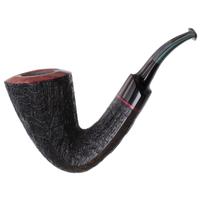 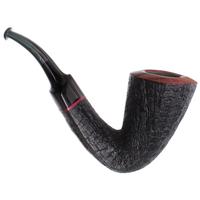 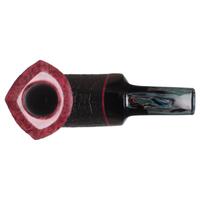 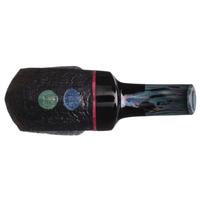 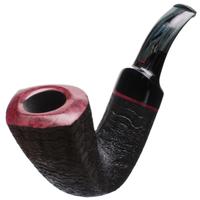 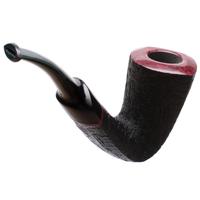 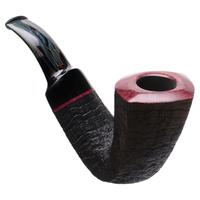 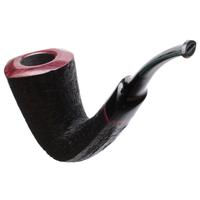