With this Snail Grade stunner, Hiroyuki Tokutomi returns, in part, to his famous fighting fugus of late 2005 - mid 2007. A sinewy, arcing curve to the shank becomes the embodiment of the potential energy stored within the coil of a tail, frozen a millisecond prior to converting to the kinetic energy needed for an attack. The execution of the body is bold, angular, edgy; simply a splendid example of implied motion. Then we have the mount. that incredible mount. In a distinct move away from much of the elongated work that we have seen from the master, as of late, the shank contains aspects of an almost scorpion-tail return curl, and I find the form of the mount (proper) so martial, the word "Bushido" came unbiddingly to mind. Bravo, Toku-san! 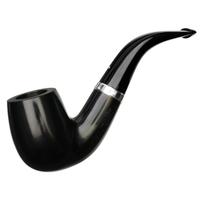 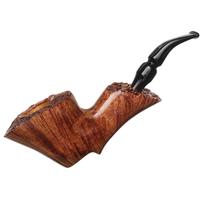