There is so much here that I'm not sure where to begin. For starters, this is a relatively rare "BN" stamped pipe from Tokutomi. This denotes that the pipe was made from briar that was bequested to him by the late Bo Nordh. When Bo died in 2006, he left a small mountain of briar to three pipe makers: Nanna Ivarsson, Kei Gotoh, and Hiroyuki Tokutomi. Since then, Tokutomi has, every once in a while, made a pipe from this briar cache, denoting it specially as having come from Bo's supply. I've seen Tokutomi's Bo briar stash and it's impressive. I've looked more carefully through Nanna's Bo briar stash because I helped her move it into a storage area when I was visiting one time. The briar came from a number of different cutters, probably purchased across decades. And, at least at the time, it seemed like a whole lot of briar (briar can be awfully heavy). Needless to say, Bo had some great briar.

This is also one of the most interesting east-meets-west sorts of pieces that I've seen from Toku in quite some time. In some respects, this is very conventionally Danish; the superficial bilateral symmetry certainly suggests that. Of course, it's not actually bilaterally symmetrical; that would be anathema to Tokutomi in a shape like this, but there's definitely a nod in that direction. Indeed, the shape is conceptually something of Bo's ballerina, with the front arc reversed. It has the same chamber orientation (where it seems to extrude from a wide panel rather than the sides), but in reverse. He's clearly riffing on Bo's work, just in fairly subtle ways. And that, I think, is the best way to do it; there's nothing wrong with making a Bo style ballerina, but I think it fundamentally more interesting to create a shape (especially from Bo briar) that echoes and riffs on Bo's ideas, while creating something original.

Beyond that, the grain is excellent, with good front-to-back cross grain covering the panel that curves its way around the circumference of the bowl, terminating into great birdseye on that large front panel. Pairing that with the sandblasted back panel and shank, the mastodon ivory spacers and that sublime piece of two knuckle bamboo and the piece just sings. 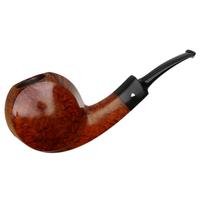