The Tsuge name has been associated with pipe making since 1924 when Kyoichiro Tsuge began an apprenticeship hand-making cigarette holders. In the mid-20th century, Tsuge transitioned to carving pipes, and after the onset of artisan pipe making in the '60s, the company sent six craftsman to Italy and Denmark. Kazuhiro Fukuda was one of those six: He studied under Sixten Ivarsson — regarded as the grandfather of artisan pipe making — and upon Fukuda's return to Japan, Tsuge established the Ikebana workshop, showcasing handmade artisan pipes and named for the highest form of Japanese flower arrangement — literally translating to "living flowers" in Japanese. Today, Fukuda supervises Tsuge Ikebana and is joined by fellow artisans Yoshirou Ohi and Asami Kikuchi, each carver fashioning their own individual pipes but united under the Ikebana name.

This Q-grade bent Dublin from Fukuda reveals the Japanese master's often organic shaping style and calls to mind his time spent in Denmark. It's a pipe marked by simplicity and minimalism, all elevated by the grace, harmony, and subtle organicism that so often characterize handmade Japanese pipes. The bowl is quite a robust and muscular affair, with stout insulating walls about the chamber, and it's upward flare erupts into a rim of craggy plateau, affording the briar's flame grain a natural termination in the form of densely packed and wavy peaks. Said bowl is, then, supported by an oval shank that curls upward in profile and flares slightly toward the stem, its slender silhouette reinforcing the bowl's prominence. Furthering that diminution, the saddle stem is an abbreviated section of hand-cut vulcanite, prioritizing smoking comfort and marked by a subtle downturn that perfectly balances the shank's curvature for cohesive compositional harmony. It's a pipe that showcases and highlights clean lines and beautiful proportions, drawing focus to the briar's stunning grain brought out by a light finish for natural appeal. 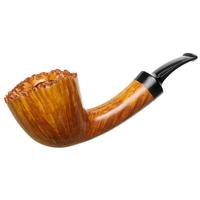 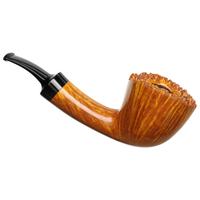 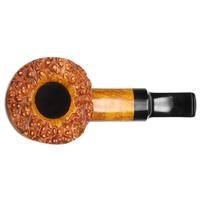 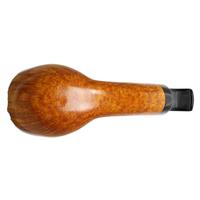 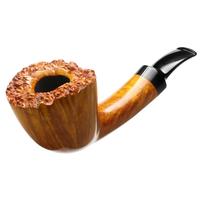 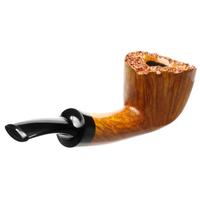 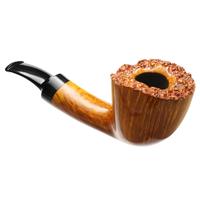