Kazuhiro Fukuda has carved for and supervised Tsuge's Ikebana workshop since its inception. The workshop was founded after Fukuda and other Tsuge craftsmen returned from visits to Denmark and Italy, learning techniques from the established makers there, and Fukuda specifically traveled to Denmark and studied under Sixten Ivarsson and Jørgen Larsen before returning to Japan and establishing Tsuge Ikebana. Today, Ikebana comprises three individual artisans distinguished by their own personal style but united under the Ikebana name, and this Shark design was fashioned by Fukuda himself.

Unlike other Freehand designs whose names immediately evoke their form, this piece isn't an exacting depiction of its namesake animal. Instead, the lines and gesture of the overall pipe hint at the swift, powerful motion of the ocean titan. Most notable is the bowl's forward protrusion: The front of the rim comes to a rounded point, not unlike a shark's nose in profile. Said bowl maintains a squat demeanor, and its stoutness is matched by the upturned shank — such muscularity combining with the composition's dynamic line work in a similar manner to a powerful shark's unexpected grace through water.

The shank offers the stummel's only hint of hard lines, with the end marked by a sudden flare and crisp, encircling panel. This design cue calls to mind vintage Danish pipes, specifically those by Jørn Micke, and such inspiration fits into Fukuda's affinity for Danish pipe making and the time he spent studying there in the 1960s and '70s. The expansion ring of the stem mirrors this shank end line, harmonizing the stem with the stummel and cohering the entire composition. Lastly, the shaping of the stummel aligns beautifully with the briar's natural grain patterns: Cross grain sweeps across the flanks in unison with the bowl's forward-urging trajectory, terminating at its "nose," while whorls of birdseye canvas the underside — all highlighted in a rich, auburn contrast stain. 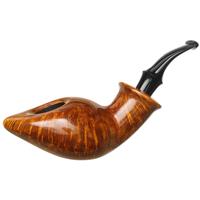 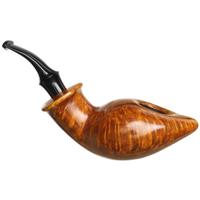 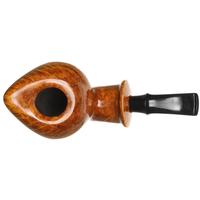 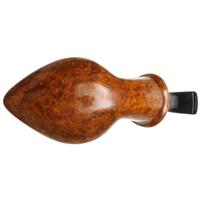 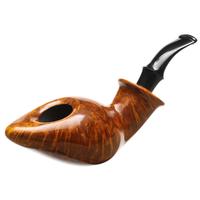 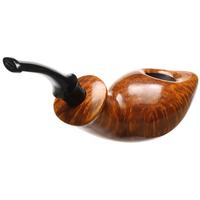 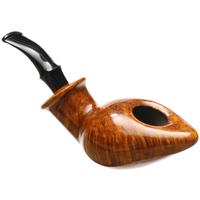 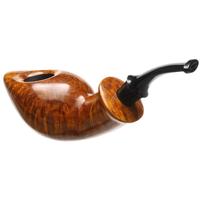