Tsuge's Ikebana workshop comprises the artisan side of the Japanese marque's offerings, and, throughout its history, has solidified a legendary reputation as the most highly revered artisan workshop in all of Japan. The name itself, Ikebana, translates as "living flowers" and refers directly to the highest echelon of Japanese flower arrangement, its goal being to instill silent appreciation of the work and of the natural world which surrounds it, a goal that the three carvers who make up the workshop strive for in their pipes which are often known as the "flowers of the pipe world." This particular piece was crafted by their most senior member, Kazuhiro Fukuda, who had the distinct honor of being trained by none other than Sixten Ivarsson, the father of artisan pipe making, and this is evident in the fluid curvature of the profile, despite its quite bold shaping.

The shank and stem here comprise an arcing combination that is kicked high by the former, while the latter's swift taper and gentle downturn offer both a comfortable smoking posture and an elegant stature overall. Said stem additionally showcases a thin ring of silver embedded into its base, giving it a tasteful dose of flash which contrasts against the more inky tones of the stummel, as well as the stem itself. Given that the outline of this stem is less sharp than would be seen in a saddle arrangement, its rapid taper contributes to a stylistically unique undercurve that runs from the button to the rim, dipping, rather than stopping, at the stem base and continuing through the sweeping underside of the briar. The separation offered by its silver fitment contributes to a bit of structure in the aft side, though, overall, this pipe is dominated by its curves, and these are most prominently seen at the bowl. A rather wide transition offers plenty of room for thumb draping, and it is from here the bowl grows with an almost Brandy-like taper to the rim, the transitional side lending the briar a bit more forward travel than the fore, though this serves to magnify the bowl's upright stature rather than push it forward. The low-set waistline of this bowl gives the fingers a fantastic index point and contributes to an excellent feel in hand, its curves and hearty build ensuring that its presence is felt, while the thick walls and large chamber on offer ensure plenty of long, pleasurable smoking sessions. Dressing the briar is a crisp sandblast and the aforementioned inky stain which sees rippling ring grain climbing up the walls of the bowl, while the smooth rim showcases a warm, mahogany stain and freckles of birdseye. 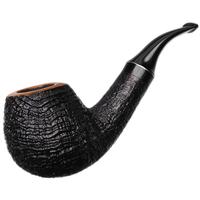 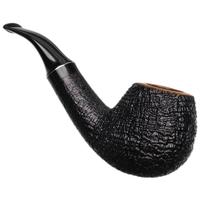 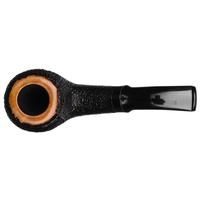 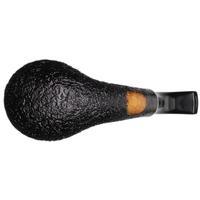 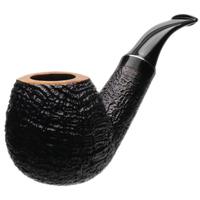 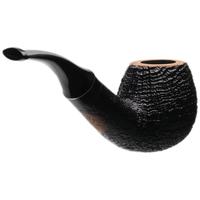 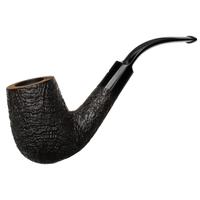