Happy Fourth of July! Though we're still taking calls and shipping boxes, because of the holiday, our Customer Service call lines will be open from 10a EDT to 5p EDT today, rather than the usual 9a EDT to 7p EDT. We'll resume our normal service hours tomorrow.
New Pipes » Werner Mummert » Sandblasted Bent Billiard

Werner Mummert is something of an enigma, as there is very little known about his personal history, his life outside of pipe making, or any possible apprenticeships he may have had. That being said, his inspirations are clear to see through his work, with pieces that are fairly traditional, yes, but many others that range from the intensely stylized, to the boldly functionalistic, and even literal interpretations of Bauhaus furniture design.

This bent Billiard sits happily among the first of these three, and showcases Mummert's ability to balance proportions, visual weight, and even shaping. The stem here is a sleek black taper of vulcanite, downturned at the bit for a comfortable smoking posture and fitted with a broad, expansive base of variegated green, smoothly leading into the shank which, itself, is dramatically flared from the transition. Said transition is possessed of a supple cheeking and, underneath, the shank extends just a bit, its extra length upholding the bowl and adding a bit of curvature to the outline. The bowl itself is very much a singular interpretation of the Billiard bowl, with a low-set waistline and a steep, gradual taper to the rim, very much like the Egg, giving the pipe an excellent feel in hand, with the space offered by the transition providing more than enough room to drape a thumb. The rim is asymmetrical, with a degree of slope to its build and a defined degree of lift given to its fore, creating a visually sharp edge that provides a degree of intrigue to the bowl.

There's a good deal of difficulty in balancing a pipe visually, the task requiring accurate shaping all around, and a keen eye for line work that ensures one aspect of the piece doesn't receive too much visual weight. Mummert has achieved what I would consider a near perfect balance here, as both the size and shape of the shank and bowl are extremely close to each other, with the flares of both acting as a kind of continued rhythm through the stummel. The rim's high lip at the fore stylistically mirrors the shank's underside extension into the heel, and while the length of the stem could potentially pull visual weight away from the stummel, the more forward orientation of the aforementioned features prevents this, something solidified by the negative space offered by the transition. Dressing this piece is a deep sandblast that reveals craggy stacks of undulating ring grain that rise up the bowl, with all of the briar stained a striking forest green, matching the stem's base. 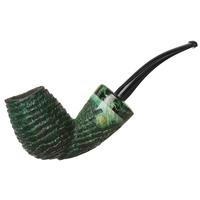 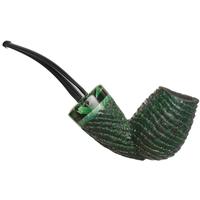 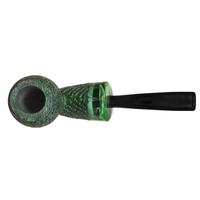 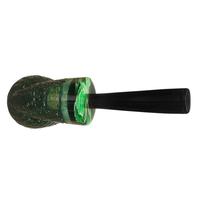 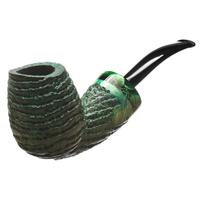