This gestural take on the Tomato from Poul Winslow pairs a broad, pleasantly plump bowl to a high-kicking bent shank and saddle stem configuration. The bowl is squat and low-slung in its orientation with a respectable amount of substance lent to its insulating walls. The transition is almost non-existent, the thick shank quickly sweeping upwards to the arching acrylic mouthpiece. However, what truly grabbed my attention is the magnificent array of grain that covers the stummel and how Poul perfectly shaped this piece to maximize the grain's orientation. The firm ridgeline that wraps around the bowl's heel separates the birdseye covered base from the tight streaks of vertical grain that cascade down the flanks. The Danish artisan has dressed the stummel in a rich contrast stain that accentuates the gorgeous grain and has accented the shank end with a band of black palm, here displaying a leopard pattern across its surface. 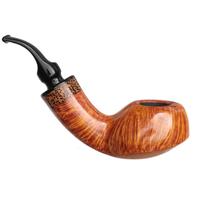 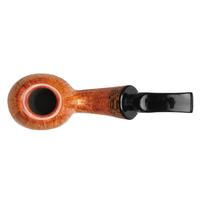 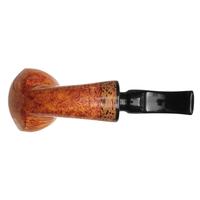 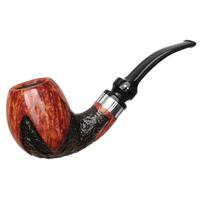 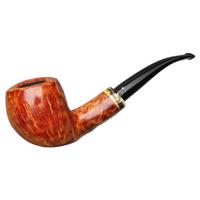