This Wojtek Pastuch offering is quite a special piece as it's the first time we've received a Blowfish design from the Polish carver and is just the second time we've seen one of his pipes feature a bamboo shank extension. It's also a remarkably unique interpretation of a shape that already presents an abundance of creative possibilities to pipemakers. When rendered by a carver like Pastuch, who has a keen eye for playfully creative designs, it becomes even more striking in its execution. While Wojtek has utilized the bowl's ridgelines to accentuate the typically rounded flanks of the Blowfish design, he's done so in a way that deviates from the way most artisans would approach it. The right flank immediately stands out with its concave orientation as the disc-like panel sits on the bowl in a way that looks like a crater on the moon's surface. It not only gives the piece some intriguing visual and textural diversity, but also serves to emphasize the roundness of the left flank. Finish-wise, Pastuch has dressed the stummel in a crisp sandblast, with the inner-most portion of rim left smooth for a subtle accenting touch. A single knuckle of bamboo extends the shank, and its pale color expertly complements the stummel's light tan stain. It's an exciting piece from Wojtek and really highlights his imaginative approach to shaping. 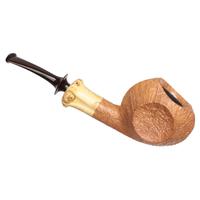 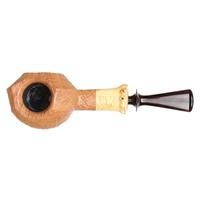 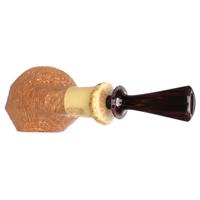 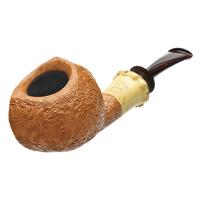