Wojtek Pastuch is a Polish artisan pipe maker with an incredibly diverse portfolio, ranging from sleek renditions of classic shapes to impressively artistic and sculptural designs all his own. Now reaching his 10-year mark as a pipe maker, Wojtek wanted to do something extra special to commemorate the occasion, to really push the extremes of complexity while maintaining a clearly artistic presentation. To put it mildly, he has outdone himself, with what I would argue is the most incredible pipe we have seen from him to date. He has dubbed the shape a Hornflower, and created an aquatic theme that is unmistakably organic, fluid, and as detailed as the sea life it represents.

The feature that immediately captures my attention is the curvaceous scalloping that radiates from the edge, like flares from the sun, points of a sinuous star, or fins of a fish sweeping through water. I could turn this piece around in my hand for days and not yet absorb every beautiful nuance of their rendering (I did, for over half an hour, before I reluctantly put it down). Concave surfaces are some of the most difficult elements to execute well in pipe-shaping, but Pastuch leaned into that difficulty with complex, compound curvature that flows from one concave surface to the next, facets delineated by ridgelines that manage to be both crisp and fluid at the same time. Everywhere I look, the piece is taking off in a new direction, not chaotic, but clearly intentional, with the lines all leading to a swirling spiral underneath, as well as curved facets on the shank that blend with the design with incredible unity. It's a feat of imagination and engineering, not to mention shaping acumen, that cannot be believed until held, and is quite difficult to fully absorb even then.

Standard pipe shapes, even artisan renditions, often have roots in grain patterns, with a Dublin following the flare of vertical grain, a Blowfish designed to accentuate cross grain, etc. The mark of a true artisan is the ability to design a bespoke shape such as this organic Hornflower yet take advantage of the grain and put it all on full display on the very first attempt. Pastuch has nailed it so well I would think this is a signature shape he has made for a decade, not his first-ever, with stunning fields of birdseye adorning the top and bottom and vibrant flame grain living on the scalloped sides. It's dressed in a smooth finish and light stain to let the grain's natural beauty speak for itself, and it does, in a commanding and seductive voice that mesmerizes my soul. Wojtek has deftly included plateau at the rim and the curved aspect of the shank, in a seamless transition from smooth crafted finish to the texture of nature itself, a flawless execution of organicism. An accent of sea snail shell further unifies the aquatic aesthetic, perching neatly on one of Pastuch's hand shaped and funneled vulcanite stems that tapers to a sleek lip button, offering a compelling invitation to smoke this work of art. 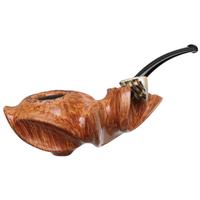 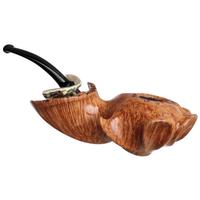 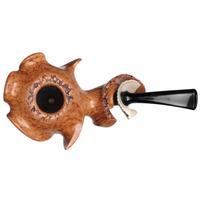 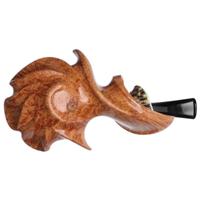 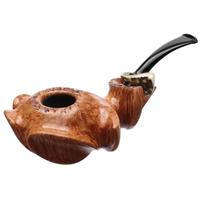 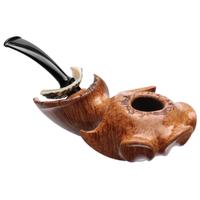 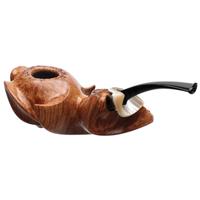 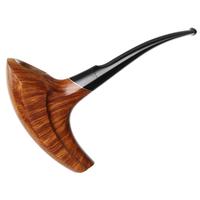 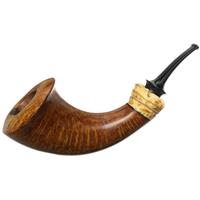