Wojtek Pastuch has held a deep appreciation for pipes since the age of 15, starting a collection of his own after a time and repairing pieces that he could find, not only to expand his rotation, but because he enjoyed it. In doing so he awakened a passion within him that stemmed from an appreciation of the craft and the process of creating these pipes, leading him not only to begin carving his own, but to visit the workshop of legendary Danish artisan Tom Eltang, who helped him on his way. Pastuch showcases a staggering degree of stylistic breadth within his portfolio, from the classic to the unconventional, and even pieces of a more sculptural, whimsical leaning, each novel exploration rendered with a skilled and refined sense of line and balance.

This Tomato is certainly one of Pastuch's more traditional pieces, with a very reserved outline and a rather refined sense of sleekness about it which keeps things looking quite charming. The shank and stem ebb out from a wide, low-lying transition, with the trim shank meeting the stem at a junction marked by a domed accent of black palm. Said stem is a slender taper of black vulcanite that's thinner than the shank, looking similar to a military mount configuration while maintaining a standard mortise/tenon arrangement. A defined sense of understated elegance is apparent at the aft end of this pipe, standing out in contrast to the more robust fore. At the bowl is a familiar sight for lovers of the Tomato shape: a charming, chubby bulb with ample curvature through the walls and a squat build which makes for a comfortable fit in hand, the transition leaving plenty of room to drape a thumb. This pushes the visual weight almost entirely forward, drawing the eye to its contours and placing attention on its crisp, craggy sandblast, revealing ripples of growth rings beneath its dark stain, all while the shank end accent and smooth rim offer contrast. 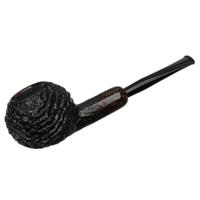 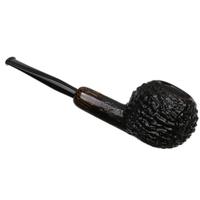 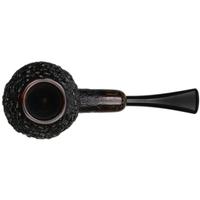 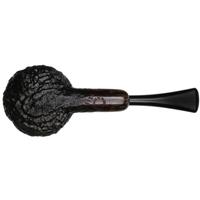 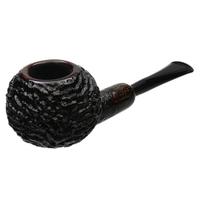 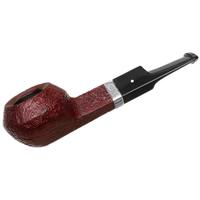 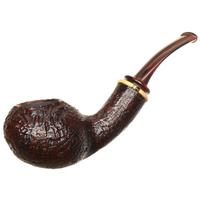