Wojtek Pastuch has held a deep appreciation for pipes since the age of 15, starting a collection of his own after a time and repairing pieces that he could find, not only to expand his rotation, but because he enjoyed it. In doing so he awakened a passion within him that stemmed from an appreciation of the craft and the process of creating these pipes, leading him not only to begin carving his own, but to visit the workshop of legendary Danish artisan Tom Eltang, who helped him on his way. Pastuch showcases a staggering degree of stylistic breadth within his portfolio, from the classic to the unconventional, and even pieces of a more sculptural, whimsical leaning, each novel exploration rendered with a skilled and refined sense of line and balance.

The bent Egg is a shape that Pastuch has rendered multiple times in the past, often crafting silhouettes that are svelte and lean, with tall bowls that maintain a lengthy taper to the rim. Here, he's extended the outline of the shape significantly, increasing its reach to over six inches, and, while he's maintained the enhanced size of the bowl, he's exaggerated the plumpness of the waist quite a bit. The taper to the rim here is more reserved in comparison as well, and the shank and stem that lift out of the wide transition are a touch less sinuous. The resulting profile is one that is quite fluid and fills out the palm excellently, its rotund bowl filling out the contours of the hand comfortably while leading the eye to the domed rim. The momentum which this pipe develops over its gentle s-curve is palpable and dynamic, and the negative space in between the saddle stem's expansion ring and the shank's domed face draws some of the visual weight back from the bowl, creating a balanced look which keeps the eye focused on its form. Dressed in a vibrant auburn contrast stain, the bowl showcases a wealth of dense birdseye on either flank, while the midsection is striated by cross grain. 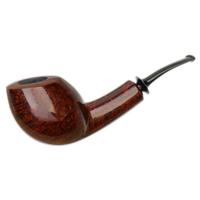 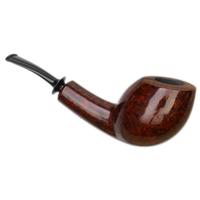 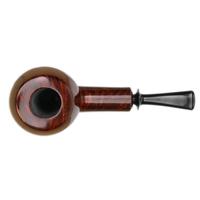 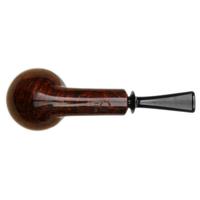 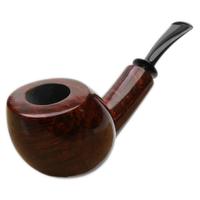 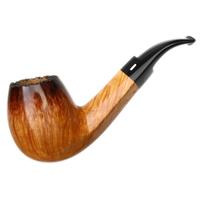 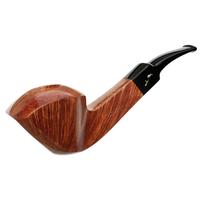