Self-taught practitioners of a craft tend to approach their work with something of a different mindset than those who entered the field through traditional outlets. Within the context of pipemaking, that sort of approach can catalyze a shaping style intrinsically tied to a given maker. Such is the case with Wolfgang Becker, who began his journey with carving after eyeing some pipes by none other than Lars Ivarsson in a catalog. Realizing that he would not be able to afford such a piece, he decided to fashion one of his own, setting the German artisan on a path just as ambitious as that first foray.

Wolfgang's pieces are often exercises in minimalism, making use of playful curve and seamless, elegantly rounded feats of shaping a' la the Danish school, and this bent Egg is no different. The carver seems to enjoy playing with the perceived proportions of a piece's bowl in relation to the shank and overall form, often compressing the piece down the middle to make for a more svelte design overall, but here he's decided to take things in the opposite direction. The bowl itself is undeniably broad, offering ample briar to grab a hold of, while the shank itself is horizontally compressed, and twisted ever-so-slightly rightward (from the smoker's perspective). A soft-lined mammoth mount guides the eye to the slender, aftward-kicking saddle stem, the likes of which wear an elongated, domed base. As for the mount, it tapers gently down to the underside, serving to complete the gesture initiated by the shank. It's a Signature grade, too, Wolfgang's highest. Altogether, this piece is a true gem. 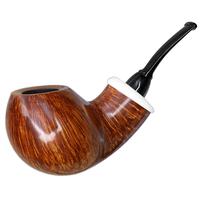 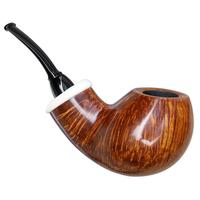 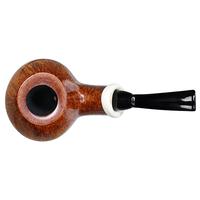 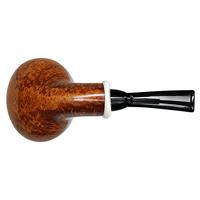 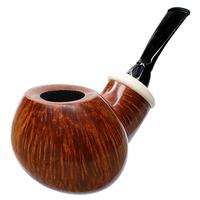 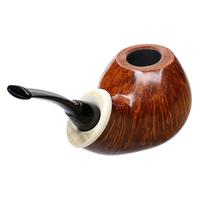 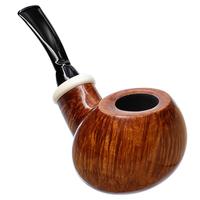 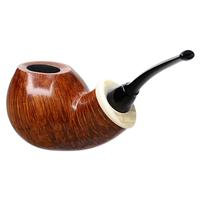