If you're yet unfamiliar with Wolfgang Becker's work, this bent Egg is the perfect introduction. Not only is it one of the German carver's signature shapes, but it also bears his esteemed Signature grade, marking Wolfgang's superlative pieces. Becker fell in love with pipes in the '80s, greatly admiring the work of Lars Ivarsson he saw in Pipe Club magazine, which eventually led to Wolfgang making his own pipes with help and advice from Klaus Hahn, another German artisan. Since then, Becker has become a highly esteemed pipemaker, his style readily recognizable through a utilization of bulbous forms, subtle asymmetry, and an all around playful approach to shaping.

This bent Egg exemplifies Wolfgang's signature aesthetic and is a shape the German carver has returned to time and time again over the years. In profile, the design is most notably defined by the palm-filling bowl. Despite its muscular mass, though, it showcases a surprising degree of dynamism in its forward cant, angled rim, and sweeping heel, belying the form's thick-walled muscularity. Most characteristic of this signature Becker shape, however, is the shaping of the shank — when viewed from the smoker's perspective, the pinched, oval orientation is tilted slightly leftward, offsetting the transition and offering a playful sense of asymmetry. It's a touch subtle enough not to be evident in profile, but one that tastefully makes this piece a standout among other bent Egg renditions. Topping it all off, Wolfgang has accented this one with creamy mammoth at the shank face and a trim, stylized stem that keeps the visual weight bowl-focused and displays the carver's impressive craftsmanship. 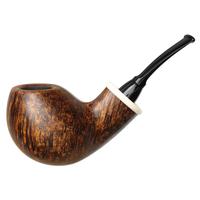 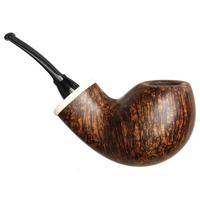 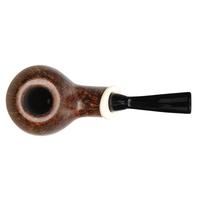 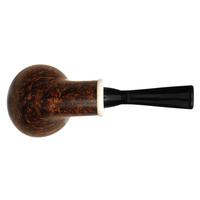 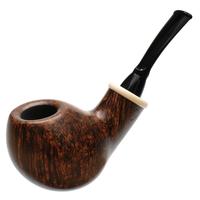 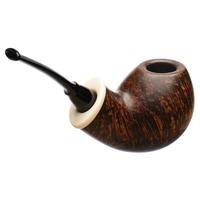 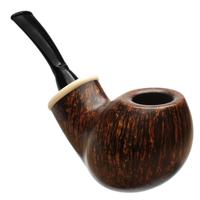