The reputation that Wolfgang Becker enjoys is nothing if not impressive, and this is all the more intriguing given his start as an autodidact in 1987, not receiving help or instruction until the '90s. This was also around the time he began to sell his work, though I suspect this was more so out of a desire to ensure that every example of his craft was as perfect as possible before asking to be paid for it. Since then, Becker has become a well-known and, of course, highly regarded member of worldwide pipe artisans, and his perfectionism reflects in his extremely low annual production count of well under 100 pieces per year.

This piece from the German artisan is one of his signature shapes and a profile which is extremely well-represented in his portfolio: the Wasp. This is one of the most successful and desirable signature shapes that I know of, with a clearly defined combination of features that keep the shape looking both unique and classic, familiar, yet novel all at once. This particular iteration of the shape is quite appreciably large, though it only stretches out to just over five and a half inches long, and features a palm-filling substance through the bowl and shank. These two areas keep in good proportion with each other, however, and don't give any one side an excess of visual weight, keeping your attention near the transition.

The shank itself sweeps upward from its transition to a broad, flared end that's then accented by an equally broad fitment of mammoth, the accent sloping inward at its face and recessing to allow the demurely curved stem's base to nestle into it. I really appreciate this detail here, and it almost mirrors the rim's inward slope as well, an understandable addition given both ends' similarity in size. A defining feature of this shape is the transition, coming to us as a pinched section of briar that enhances the visual separation of the bowl and shank and acts to make this profile truly "wasp-waisted." Another such shaping detail is the outline of the bowl, displaying a touch of asymmetry when viewed aerially and being compressed at the fore and aft, and showing an almost Scoop-like build from the flanks. This not only makes for a striking look, but an extremely comfortable feel in hand, as the plumpness of these oblong walls allows the shape to conform to the contours of the fingers and palm with ease.

As a whole, this piece is quite smooth of line, with fluid curvature throughout its expanse and a pervading softness that keeps the eye wandering over its outline. Dressing the briar is a partial sandblast unlike many I've seen before, as the bowl displays textured ripples of growth rings all around, though the shallowness of the blast itself allows the stain to really come through. When I say this, I mean to highlight the stunning clarity of the visible flame grain that surrounds the bowl just as well, and also the birdseye present at the aft wall and underside, just as textural as it is visual. The rim and shank are finished smooth, with the latter revealing even more of that bountiful flame, while the former swirls with ample vortices of birdseye. 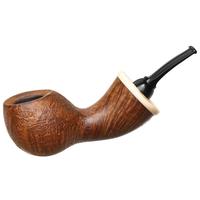 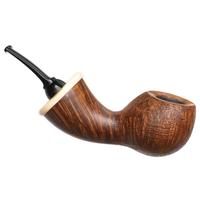 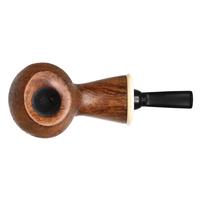 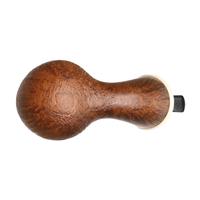 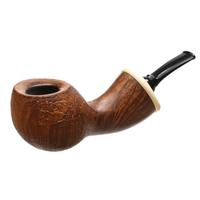 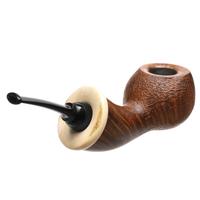 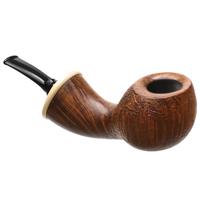 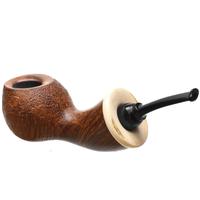