In 2010, while working as a makeup artisan in China's film and television industry, Yang Kun was shown a book of Sixten Ivarsson's pipes, and he immediately fell in love with the craft of pipe making. Just two years later, Kun left his job as a professional makeup artist in the entertainment industry to become a pipe maker full-time. Yun studied under artisan carver Hongjian Qiu, who taught Yun the fundamentals of drilling, draft hole funneling, and contrast staining.

This Vase is a striking example of Yun's shaping style, which is steeped in organicism, and it's an homage to a signature Hiroyuki Tokutomi design. This piece features a broad, forward-canted bowl that flares outward from its flat, sure-sitting heel to its wide, chamfered rim. The muscular transition keeps the overall form tightly knit and bridges the shapely bowl to a vertically inclined shank-and-stem arrangement. The flaring shank mirrors the bowl's upward expansion, creating a visual harmony across the totality of the stummel. Plateau around the shank face adds a touch of rugged character to the otherwise smoothly polished stummel, while the green vulcanite stem adds a splash of color to the pipe's profile. Dressed in a warm auburn smooth finish, the stummel displays fine strands of flame grain as they rise across the flanks of the bowl to a rim populated in birdseye. 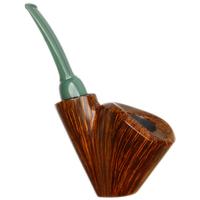 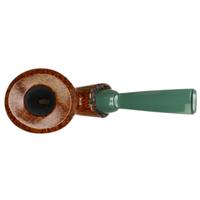 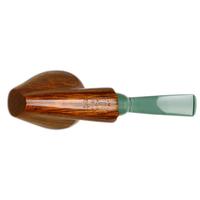 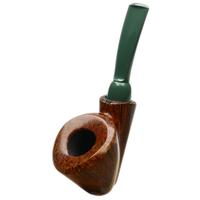