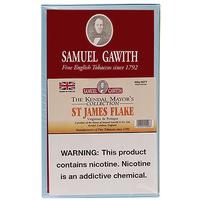 Samuel Gawith - St. James Flake 250g
Difference in bulk?
I'm scratching my head on the bulk purchase. The flakes were much lighter in color and the cut much thinner than the tinned version I have on hand. I tried a flake before splitting the box into two jars and putting it in the cellar, but it didn't have near the taste that my tinned version had. This being the first bulk version I've purchased, I thought maybe a bit of time would improve things. After 11 months (purchased in March 2017), I cracked one of the jars to give it another shot. Surprisingly, there wasn't much smell in the jar, especially compared to the tinned version I also have in the cellar, but the flakes had still maintained their moisture level. I tried a smoke and it was still quite bland. Unfortunately, this didn't resemble my stash of the tinned version at all. Maybe a poor batch? I'll probably just stick to the tinned version in the future.