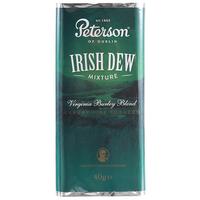 Peterson - Irish Dew 40g
I DON'T GET IT
After opening the pouch I found very little aroma. As a matter of fact, it smelled quite bland, as I was expecting some of the fruit/vanilla that this product is advertised as having. It lights easily in my Savinelli half-bent apple, but I was very unimpressed with the flavor and aroma. It's almost as if this tobacco was packaged without the flavoring! The chocolate showed up faintly in the aftertaste, but I perceived absolutely no "vanilla" or "blossom" notes. If the taste and aroma is supposed to be light, then it has definitely floated away. The burley has a bit of a bite, but as a straight tobacco it is of good quality. I have found Peterson tobaccos to be either great or a bit non-distinctive. This is one of the latter. I favor Connemara much more than Irish Dew. I'll give it another try, but I'm not keeping my hopes up. I just don't get what Peterson was up to, here. 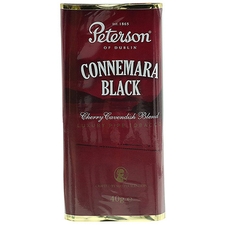 Peterson - Connemara Black 40g
AN EXCELLENT CHERRY TOBACCO
The Connemara district in West Ireland, famous for its scenic beauty, the eponymously-named pony and Irish whiskey, and the birthplace of Peter O' Toole, can now add a fine pipe tobacco to its name. Peterson has expertly blended Black Cavendish and flavorful Virginia to make one of the best cherry tobaccos I've ever smoked. What makes this exceptional is that not only do they have an authentic cherry flavor spot on, but the tobacco itself is fairly dry out of the pouch and smokes the same way, dry and cool, with minimal tongue-bite and bottom-of-the-bowl slurry -- something that not many cherry blends can lay claim to. I fired up a bowl in my ca. 1970s Vuillard Saint Claude freehand after packing it lightly and enjoyed it to the bottom on one match. This is a quality tobacco and I will be buying this again. 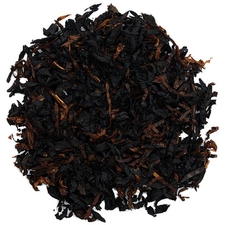 Newminster - No.23 Blackberry Brandy
SMELLS BETTER THAN IT SMOKES
There is no question that this potent mixture smells true to its name. As a matter of fact, it is so potent that its fragrance could be detected outside the shipping container! I agree with other reviewers that the flavor evaporates soon after lighting. That said, it is a pretty smooth smoking experience. A warning though, to all natural tobacco pipe smokers-- Beware, the ghost of Blackberry Brandy! I will smoke it occasionally. 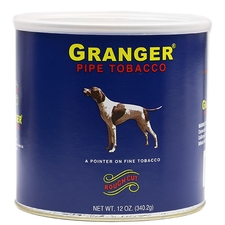 Granger - Granger 12oz
A NICE, MILD SMOKE
I admit, I bought a can of Granger based solely on nostalgia alone. I'm not a huge Burley smoker, but after lighting up a bowl of this 'baccy, I can see why many refer to it as an "all day" smoke. After peeling back the lid of the can I took a whiff and was pleased that there was little more than a mild, slightly nutty aroma. It smoked easy and fairly cool, just a little passing tongue bite, and I didn't get the "ash tray" finish like I have on other OTC brands. I rate this higher than Prince Albert, Carter Hall, and the slippery muck that is calling itself Half and Half these days. I enjoyed it and will continue to "stay on point" with Granger. 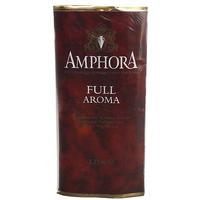 Amphora - Full Aroma 1.75oz
Not What I Remember
I bought this hoping to make it once more my "go to" blend. After smoking a couple of bowls I'm sorry to say I'll have to reconsider. Trying a tobacco that has been re-introduced after years of being unavailable always comes with a prefigured notion. While I may be wrong, this is not the Amphora that I remember smoking in the 1970s. It is also not the same blend that was sold by Imperial Tobacco of Holland. That said, this "new" version of Amphora Full Aroma is a pretty good smoke. The flavor is very good and the room note, while lighter than I expected for a "full aroma", is nevertheless pleasant. I am reminded of the saying, "You can't go back home again." But then again, memories are sweet. 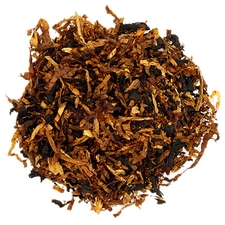 Sutliff - 150 Mark Twain
A Delightful Smoke!
I am a longtime fan of Sutliff tobaccos and Mark Twain is no exception. A delightfully pleasing aromatic! Vanilla seems to predominate, but there are other good things going on underneath. While smoking this I wondered how it would be with a little maple mixed in. Overall, a light and cheerful blend!