LWOOD007
About Me:
a son of fallen southern aristocracy. 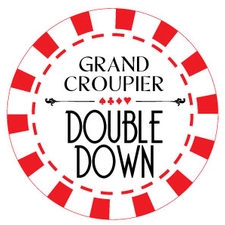 Grand Croupier - Double Down
No drugstore cowboy
Times as they say, are tough all over and tough times makes a bargain a very good thing indeed. Those old names in brightly colored pouches traditionally behind the counters of your local drugstore have been around for far longer than we have, and for one simple reason, regular folks can afford to buy and enjoy them. They are simple, cased Burley with varying amounts of Virginia to balance the blend. Don't confuse "Cased" with an "Aromatic", there is no cherry and no vanilla here to club you about the head and ears, think a hint of honey , a drop of rum, a taste of molasses. Grand Croupier Double Down is a mashup of this old recipe, mellow burleys some dark, some light with mild casing, nothing overwhelming, just a kiss of sweetness. The kaleidoscope of Virginias do their job and gives you a nice easygoing smoke. Where Double Down really shows it's stuff is in the quality of the tobaccos, that really shines through and raises the level of the smoking experience far above those old drugstore cowboys. So if you want to fill some mason jars for these tough times, or just to make sure that you are never out of something good to fill a pipe with, it would be hard to go wrong with Grand Croupier Double Down. 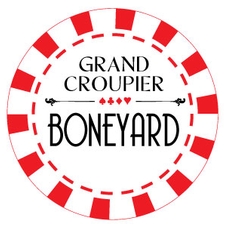 Grand Croupier - Boneyard
It's not gambling if you can't lose
We all know the feeling. The tightening around the eyes,the fluttering in the belly, and the sweating palms. The feeling you get when you are placing a long-shot bet. That is the usual feeling that comes when putting hard earned coin down for a chance of a return. Well when I completed my recent order that included Grans Croupier Boneyard, that was exactly how I felt. I had hoped that it would be at best, smoke-able. When my order hit my mail box faster than I thought possible, I was Impressed. When I opened the box and found a bag not of powdery shake but beautiful big pieces of tobacco, I was astounded. Opening the bag and inhaling the unmistakable fragrance of Latikia, seeing the many shades of Virginia; golden flakes, rich brown pressed pieces, bready red shag...I was grinning like the Cheshire cat. The true proof was when I filled my pipe and touched a match to it. Latakia's smokey goodness, sweet Virginia, and more, the high piping of orientals and a peppery taste that could only be perique, all there, blending in a cloud of full thick smoke. I have paid orders of magnitude more for hallowed names on small tins and not been near as pleased as I am with this "catch as catch can" blend. Gentlemen, place your bets, we already have ourselves a winner.