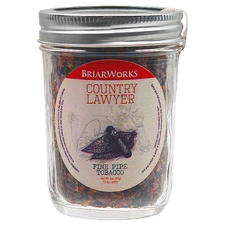 BriarWorks - Country Lawyer 2oz
Fills its Niche Nicely
I got a jar of Country Lawyer for free when I bought a BriarWorks pipe, and even though I'm not a fan of cigars, I still enjoy this cigar blend. In my mind, Country Lawyer tastes the way a cigar SHOULD taste, with nary a hint of any flavor other than good old-fashioned tobacco. I shared some with a friend who initially refused it when I described it as a "cigar blend", but after giving it a try he insisted that it wasn't nearly as cigar-ish as I'd implied. Not sure if I agree with his assessment, but it's a good tobacco regardless, and one that's mild enough to be an all-day smoke without overwhelming the palette. It burns pretty cool and generally stays lit well, but I've definitely noticed that Country Lawyer smokes far better for me in straight-chambered bowls than in tapered bowls. When I smoke it in a tapered bowl, it generates a lot of moisture and begins to taste acrid about halfway through. For that reason I can't give it a higher rating, but it's definitely got a place in my current rotation. 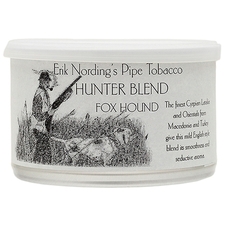 Nording - Hunter Blend: Fox Hound 50g
Rich and Creamy
Picked this up on a whim shortly after purchasing a Nording pipe, and was very pleased with it. The body of the smoke is almost velvety, with a strong but not overpowering flavor. Fox Hound hits all the right "notes", smelling great in the tin and in the room. Burns surprisingly cool for such a seemingly-moist and dense blend, and continues to provide that sweet creaminess right up to the end of the bowl. I've had several non-smokers remark on the lovely aroma of this tobacco, so if you're looking for something that won't offend the nostrils of tobacco-averse friends and family, Fox Hound is definitely one to try. 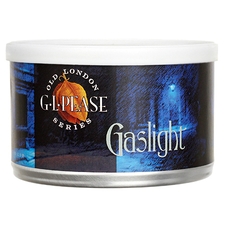 G. L. Pease - Gaslight 2oz
The Rolls Royce of Pipe Tobacco
I could gush on endlessly about how much I love Gaslight. There aren't enough adjectives in the English language to properly describe the depth of flavors in this wonderful blend. It's certainly not an all-day smoke, and for me, it's not even a "regular rotation" smoke. I prefer to really savor each bowl of Gaslight, searching each and every puff for the delicate nuances of flavor that subtly change as it's smoked. I feel that if I smoked this tobacco every day, I'd end up dulling my palette and lose my ability to appreciate less-complex tobaccos. In my opinion, Gaslight is best smoked sparingly to make sure it remains something special.

Peter Stokkebye - PS402 Luxury Twist Flake
Versatile
A pleasantly buttery tobacco with mild vanilla notes. Burns best for me when allowed to dry just a bit before packing. It's smooth and mild enough to be an all-day-smoke, but for me, its best quality is its use in experimental blends. The friend who introduced me to the pleasures of pipe-smoking loves to try his hand at flavoring and aging his tobacco. Most recently, he opened his jar of Stokkebye cube-cut that he'd aged with a shot of Chambord. While the raspberry flavor was nice, it was a bit too strong for my tastes, and the tobacco burned very hot, causing some tongue bite. When blended with some of the Luxury Twist Flake, though, it mellowed into a lovely "dessert" tobacco with all the positive qualities of an aromatic, and none of the gross, sticky, overpowering residue that aromatics so often deposit throughout a pipe. Luxury Twist Flake is now my go-to tobacco when I want to take the edge off of a less-than-perfect experiment.